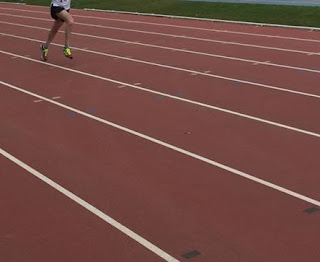 I didn't have high expectations for today's 10k race, but I'd done o.k. in a half marathon a few weeks ago (for which I was a touch undertrained), and my 5k parkruns may have provided a bit of speed, so equally, I had some reason for optimism.

The day was partially cloudy and cool, and there was a slight breeze.

I wore my lighter shoes, socks, shorts, and club vest.

I did a bit of a warm-up with a friend, and then lined up towards the front of the crowd. It was clear that I was in the sub-40 minute crowd, so I slipped a bit backwards in the minutes before the start.

In mile 2 I could feel myself slowing, but there was also a tailwind, so I tried to keep my legs turning over quickly. 2 came in at 6:43.

In mile 3, a teammate passed me, and I tried to stick on his shoulder. He was running a great pace, but I thought I just see how long I could hang on. At this point we passed a runner who had pulled up, and was massaging his achilles.

For mile 4, we turned into the wind. I was now just hanging on. Every time my teammate surged, I closed the gap. 4 was 6:45.

In mile 5 we headed along a road with traffic on the other side. I tried to relax, and let my arms hang loosely for a few seconds. I also tried to smile. I stayed with my teammate, and 5 came in at 6:33.

Now we neared the athletics stadium in which the race would finish. I was feeling o.k., so I slipped in front of my teammate. Up ahead I could see another teammate who I wished to catch. I closed the gap on her, but in the meantime my colleague caught me up and passed me again. 6 was 6:41.

We headed around the back of the stadium, and then onto the track for the final 100m. I sprinted.

So let's see what my chip time turns out to be. I would be quite pleased to set a PB at age 50.

But even if it isn't, it was still, for me, a good run. At mile 3 I was just at the point of slowing up a bit, and instead I sped up and raced with my teammate, and this pushed me to do something I've never done before (or, haven't done more than once before!).