November camping: 15 hours inside a tent 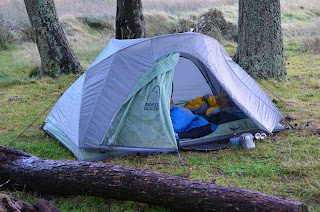 
My son and I were in the Ochils, not far from where we live, for our November camp. We were going for his camp-once-a-month-for-a-year challenge. This was his 11th month.

But life is busy. He had a rugby match in the morning, I did Parkrun, and by the time we'd had lunch and packed up, it was early afternoon.

We headed up past Stirling, and stopped at the Dunblane Marks and Spencer for pastries and snacks. We then headed up into the Ochils, parked at the side of the Sheriffmuir road, and walked in to an informal camp in the trees. There's a little sign there indicating that the camp is called 'Camp Runamuck', and a picnic table and fire ring.

At 4:30, we got in the the tent to escape from the rain. I'd brought in some kindling for a camp fire, and put it under the picnic table. Unfortunately, it wasn't a night for a fire.

The weather forecast, at least as far as I could recall it, had indicated that it would be partly sunny with a low chance of rain.

However, shortly after we'd set up the tent, the first rain drops started to fall. It strengthened, and rained for hours. Even in the middle of the night when I awoke, I could hear heavy drops on the tent fly. In the morning, the rain was intermittent, and finally paused.

It was a little chilly with the wind, so we ended up in our bags. We continued a book that I'd been reading to my son - Natural Born Heroes - which describes a WWII mission to kidnap a German general on Crete. The story is compelling, and the author includes quite a number of digressions, so we've been reading on and off now for about a year.

Later, still in the rain, I warmed some bacon in the tent vestibule (with the vestibule door open, of course). The warmed bacon butties were welcome, and somehow tasted better than at home.

We played Risk on my kindle. We were both a little tired, and after 8 p.m. turned in.

The rain continued all night.

In the morning, finally, the rain eased a bit. There was a little water on the tent floor where the fly didn't quite cover the tent, but otherwise my old tent held up well again. With our inflatable Therma-rests, our sleeping bags escaped the moisture.

There was an inversion, and the valley below was still in cloud. 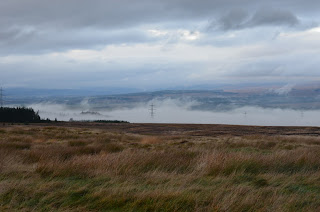 Mist in the morning, after a rainy night

We bundled up and headed into the hills. We ticked off another Ochil (we're trying to do them all). The hill was a broad peat bog, and the route was cross country, but it was good to get out. We headed back to camp and packed up.

And that was it. We'd been tent-bound from 4:30 p.m. until about 8 in the morning, except for pee breaks. One forgets how long the nights are at this time of year, but it's also a time for relaxing and enjoying being tent-bound in the rain.


Posted by Middle-aged runner at 10:02 No comments:

I was awoken by the footsteps of two hillwalkers, passing near my tent at 6 a.m. They'd must have had an early start, as I was a few miles from the nearest road.

I packed, brewed my coffee, ate and headed down the track towards Glen Muick. The track led through a pleasant forest and past a large house. Glen Muick was flat, and featured many deer. I headed past the car park at the Spittal of Glenmuick, and its useful facilities, and then along a stream into the hills. Near the Glen, there appeared to be a number of ruins, presumably from a previous village. It was warm, again, and I started to sweat a bit with my trousers on.

At the head of the stream the path faded, and I navigated by compass. I was aiming for the Shielin of Mark bothy, and emerged from the peat haggs about 200 meters to the left of structure. There was smoke coming from the fireplace there, and I could see people outside, so I headed over.

A mother and her adult daughter had spent the night in the bothy, along with a male work colleague. The latter two worked at the same outdoors shop, and asked me about what I was carrying. They were friendly, and made me a cup of real coffee, and shared a few granola bars. The man had gone with a pretty light sleeping bag, and had been cold in the night.

Eventually, I headed off up to the ridge of Muckle Cairn. From there I headed downhill and cross-country to a track.

I descended down into Glen Lee, and followed the track along the river. My left leg, sore since the big day into Braemar, continued to be an annoyance. The wind was gusty here, but I eventually emerged near Loch Lee. In a hill nearby there was smoke from a fire. It seemed unlikely to be deliberate, as it was on a steep portion of of this mountain. 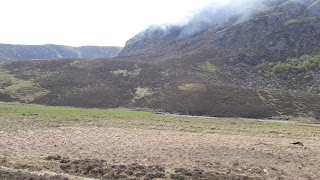 A fire in the hills (Craig Nann) near Loch Lee

I listened to a backpacking podcast as I followed the track along Loch Lee. Beyond it I followed a road past the ruins of a 16th-17th century castle, and along the water of Lee. It was a pleasant Sunday afternoon, and a lot of day walkers were out. 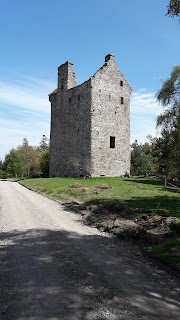 I left the road and headed along a farm track that goes over a hill and directly to Tarfside. I'd taken this route before, as it cuts off a stretch of road, but coming at the end of a long day it felt tiring (as it had when I did it previously).

I arrived at Tarfside, and checked in to St. Drostans, where I was to spend the night. 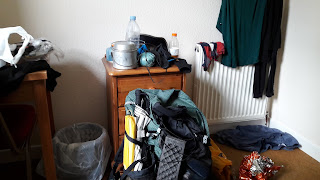 Pack explosion in my dorm room at St. Drostans

I showered and then joined the volunteers and a few Challengers in the kitchen for a welcome home-cooked dinner (fish pie!) and a beer or two. Over the walk, I'd been accustomed to eating a bit lighter, typically ramen noodles or equivalent for dinner, so the dinner felt like a vast amount of food. It was great to meet and chat with the legendary Roger Smith, involved in the Challenge since its inception, and the first editor of The Great Outdoors magazine.

I had a bacon butty and some coffee early, settled up, and then head up the road. I listened to a history podcast - The Memory Palace - as I crossed the river and followed farm tracks through the Glen. 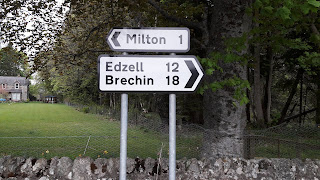 12 miles to Edzell, and then another 12 to the finish in Montrose

There was, again, a headwind, but the walking was otherwise easy. 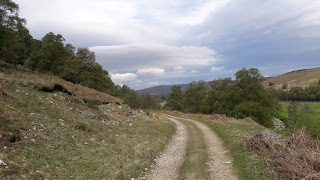 On the track through Glen Esk

My lower leg was now an issue. It was particularly painful on any downhills, where I almost had to hobble. I did my usual 55 minute walk/ 5 minute rest, but I was concerned. It would have been gutting to come this far and not finish.

In Edzell, I stopped at The Tuck Inn for lunch. Afterwards, I found a elastic type wrap for my leg, and wrapped it up tightly. This, and some ibuprofen, seemed to help. 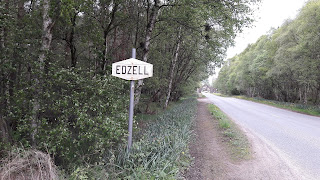 Looking back at Edzell

I pressed on, hobbling across the A90 and up along the minor roads. 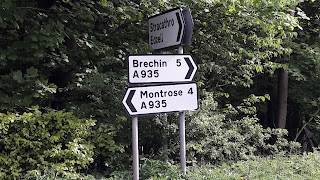 It was a full day of walking, but in the late afternoon I eventually reached the Montrose basin. 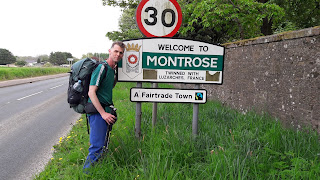 I made my way through town, and to the Park Inn to Challenge Control. There I was presented with my finishing certificate and a welcome cup of tea.

And that was it. I hobbled to the train station, and boarded a train home.

Did I learn anything this year? See:


Posted by Middle-aged runner at 12:46 No comments: 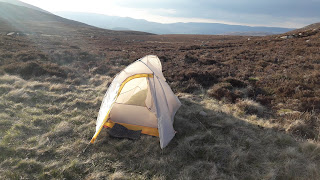 I joined Thilou and Rob for breakfast at The Bothy, a restaurant associated with the Braemar Mountain Sports shop. They weren't under the same time pressure to finish, and were considering staying put for the day. I took my leave, headed back to the campground and packed up. Once done, I took my water bottle to the washing up sink to fill up, and then headed across the road and up into the hills.

It was warm. After a good climb the trail leveled out in the forest, and I reached for my water bottle. It wasn't there. I'd left it back at the campground. I considered my options, but there wasn't really an alternative but to retrace my steps. I stashed my pack in the woods and jogged back down the hill and to the campground. 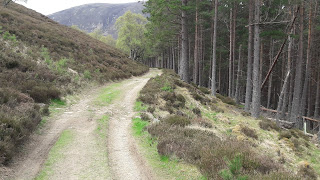 I walked this road three times as I'd forgotten my water bottle at the campground.

Back at the campground, I found my water bottle right where I'd left it. I then fast-walked back up the hill, retrieved my pack, and headed on.

The woods were lovely. On one occasion I took a short-cut that ended up being blocked by a deer fence. Later, I headed up a forest track which I thought was correct but wasn't.

Eventually, I found where I needed to go, and followed a faint path up through the woods. It was very warm.

The trees dissipated as I reached the high ground, and I then followed a track through the heather. For one of the first times ever in Scotland, I took my umbrella out to shield me from the sun! As I walked, I was startled by a small adder near the trail. 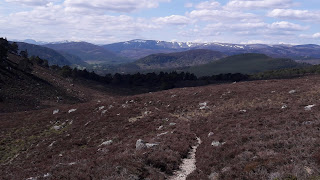 Looking back at Royal Deeside

I eventually came to a track, and rested in the shade of a small shelter. 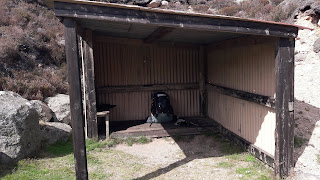 A little shelter near the track

I pushed on and reached the Gelder Shiel bothy. It was well kept, and is definitely some place I'd like to come back to. I had a late lunch there, and pushed on, as it was too early to stop. 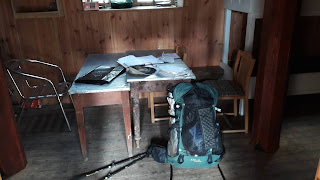 At the Gelder Shiel bothy

A faint path led through the heather. I had my rain trousers on, and my legs were sweaty. The trail was too overgrown, however, to proceed without this leg protection.

Eventually, I reached another track that led towards Lochnagar. 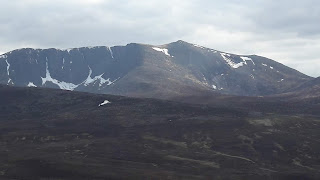 The afternoon had passed, and I was getting weary. My map suggested that there weren't likely to be many good places to pitch my tent once I started to descend towards Glen Muick, so I found a place a spot near a trail towards Lochnagar.

After setting up my tent, I followed several trails to grouse butts, but none led to water. Eventually, reluctantly, I retraced my steps on the track back to the last point at which I'd seen a dribble of water coming from the peat. I watered up, and returned to my tent to cook dinner.

It was a lovely evening, but once I'd settled in to my sleeping back, sleep came quickly.

Part 5 here
Posted by Middle-aged runner at 13:51 No comments: