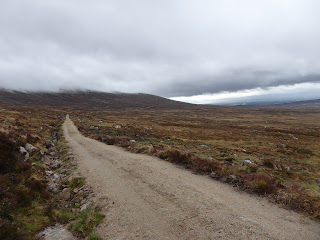 The track from Loch Ossian to Loch Rannoch

Day 4 can be found here.

I woke early, and my bunk-neighbor, Mike, was already away on his route over Ben Alder. I had breakfast, and had the fire going fitfully, but was in no rush to head out into the rain. Tim, a Challenger from Wales who'd spent the night near the railway underpass, arrived at the hostel and chatted for a bit before continuing. Eventually, I packed up and headed out. I soon caught a friendly hill walker who'd stayed at the hostel the night before, and we had a good chat while heading along the track. He wanted to do a smaller hill and was going to meet friends later back at the hostel. I continued along the track with the bleak but impressive Rannoch moor to my right.

I was concerned about food. There was enough, just, for the next 24 hours. I listened to podcasts while heading towards the road by Loch Rannoch. There, I had lunch of salmon and tortilla wraps, and the sun emerged.

My route took me along the south shore of the loch, and this was dotted with farms and tidy houses. 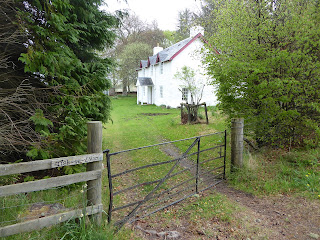 A house near Loch Rannoch

I eventually caught up to Tim, who was resting on a bench. He'd had a long day, having started before Loch Ossian, and was beat. I accepted some of his mint cake, and immediately felt my energy returning. We walked together for a bit as the afternoon wore on, and he found an excellent pitch on the loch shore. I wanted to go a bit further and camp in the woods, and so carried on.

Though the terrain was easy, I was a footsore and tired after a long day. After 5:00, I found a flat place to pitch in the Black Wood of Rannoch, and boiled the water for my ramen noodles. 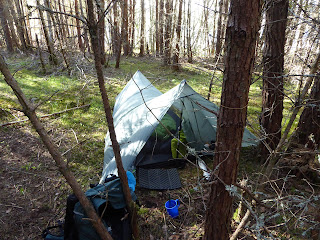 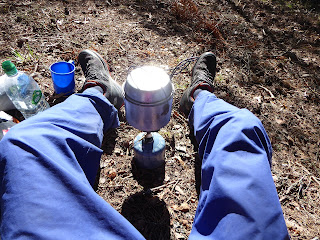 It was a bright morning along the shores of Loch Rannoch. 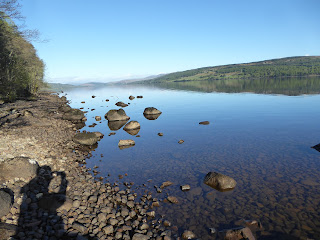 It was a pleasant walk along the road, and I met a fellow Challenger as we approached Kinloch Rannoch. There, I met up again with Tim, who'd had an early start, and we had bacon butties and coffee at the coffee shop. I resupplied at the shop in the village, and then headed out with another Challenger from London, with whom I had a good chat. He headed up to hills eventually, while I turned into the track not far from the head of the loch. Tim mentioned meeting me here, but I didn't see him until later, and it emerged that he'd taken a different turn-off.

Tim and I navigated a bit as we headed towards Tummel Bridge. In the distance, we saw the abandoned, castle-like Dunalastair House. This was build in 1852 and has been empty for 65 years. Prior to this was used as a school for Polish refugees. 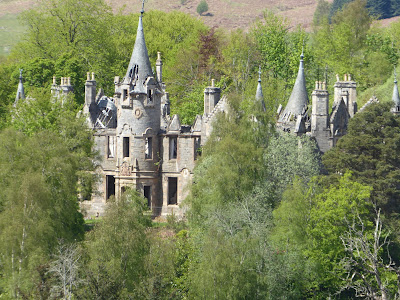 We walked along the aqueduct, and Tim peeled off to pitch his tent. I continued on to Tummel Bridge, all the while looking for places to camp, and hoping for a pub. There was one associated with a caravan park, but I pushed on, eventually pitching at a fishing site on the shore of Loch Tummel. 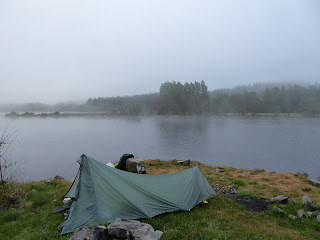 Camp on the shore of Loch Tummel

Part 4 can be found here.

Posted by Middle-aged runner at 01:09