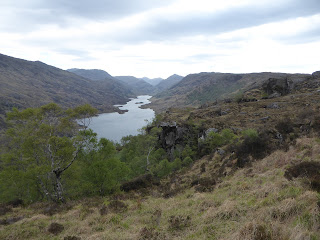 View of Loch Beoraid - there is no trail along the loch, despite what is shown on the map

This was my third T.G.O. challenge. As described previously, this is a self-supported walk from the west coast of Scotland to the east. The only real rule is you have to walk, although you can take ferries across lochs if need be.

I was at work for most of the day, and then took the train to Lochailort. On the train I met friendly fellow challengers, and we chatted about routes and, invariably, compared pack weights. We arrived in Lochailort at 11 p.m.. My colleagues were staying at the Inn, but it was full, so I'd planned to wild-camp near the river. I headed down a small road to the river, and found a spot behind a small mound of earth. It was a functional site, given that it was dark, and I was soon in my sleeping bag. A car drove by later, and the headlights illuminated the tent briefly, but, if visible, I was barely so, and it was quiet for the rest of the night. A slight breeze came up, but I was warm and comfortable.

I made some coffee, and then packed up. At the Lochailort Inn, I puttered around a bit until the restaurant opened, and then grabbed a cup of coffee. I signed in for the Challenge (the Inn was one of the official check-in points), and then was on my way.

I walked along the road for a bit, and then ascended to Loch Beoraid. A word of advice for future Challengers: the trail shown on the map along the loch does not exist! Luckily, it had been dry recently, and the bogs underfoot were springy. I made my way along the loch, meet a fit fellow Challenger by the name of Mike. We walked together for a bit, and then he went on to do a Munro. Smoke was visible on the hill, from a fire started by the steam train. I ascended through a steep pass, and then descended to a welcome bothy at Cornhully. 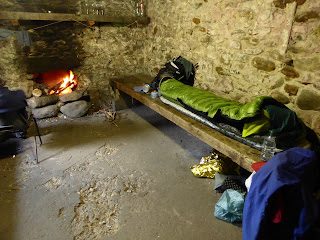 I was tired, and hadn't known about this bothy, but there was only one other person there - a friendly Cape Wrath walker by the name of Roger (or Richard) - so I unrolled my sleeping bag for the night.

Unfortunately, I think I had an out-of-date dehydrated meal for dinner (or something earlier?), and was quite unwell that night.

I packed up, and debated staying put for the day. The planned route would take me up a steep climb, into the next valley, and then up another climb. I was dehydrated, and did not have the strength or the will for this. Having chatted with Mike the day before, I was aware that I could take the ferry to Ft. William, if I could make it to the jetty opposite by 4:30 p.m. In Ft. William I could get something for my stomach and recuperate. I thus opted for a low-level route.

My route took me through Glen Finnan which, despite my physical condition, was enjoyable. I passed under the Glenfinnan viaduct. 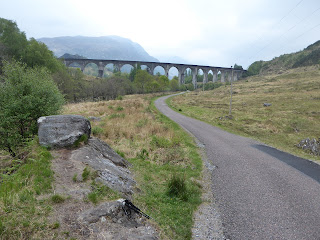 I walked along the main road to Ft. William, and chatted with another friendly challenger from Scotland. We parted ways at the A road along the south side of the loch, and I took this another 9 miles or so to the jetty. Rain had threatened all day, and materialized as I reached the small shelter near the jetty. I settled in for a two hour wait, and cooked some ramen-type noodles. The warm, salty broth was welcome.

I messed around with my phone a bit, trying to download a book. The decision not to bring one, on weight grounds, was a mistake. After an hour, Mike, who I'd met the first day, arrived. He'd taken a more ambitious route, and was now headed for Ft. William as well.

Once across, I stopped at the pharmacy for some medicine, and at a charity shop, where I picked up a John Grisham novel for £1.50. I resupplied at Morrison's grocery store, and had a very welcome sports drink.

I settled in at the Backpackers Hostel, managed a fish supper, and chatted with the varied travellers I met there.

The night in the hostel had a slight twist. Each dorm room had 8-10 bunks, and a door that locked when you shut it. At around 2 a.m., I rose for a trip to the loo, but forgot that my key was in the trousers I'd left in the room. My dorm room was locked. I tapped quietly at the door, but everyone was asleep. It was my own fault.

I realised that the guy on the bunk above me was still out at the pub, and should be back soon. I gathered a blanket and pillow from the common living room, and laid down outside our dorm room. At 3 a.m., his friend arrived, but he had forgotten his key as well. A bit later, the other guy came in, a bit worse for wear, but with his key. So, I was reunited with my bunk.

From a walking perspective, this was the best day of the trip. The walk up Glen Nevis was the best I'd yet experienced in the U.K. I arrived at a Yosemite-like valley, in perfect conditions. One of the side benefits of doing the Challenge is finding places you know you will come back to, and this was one. 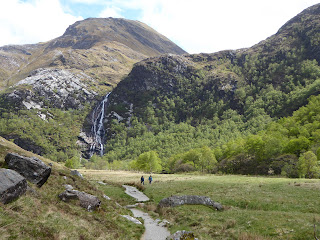 I pushed on above the Glen, with the vague goal of reaching a bothy and meeting other Challengers. However, as the afternoon slipped by and my fatigue grew, I opted to wild-camp.

I set up my tent, sponged off with water from a nice burn, and cooked dinner. As I did so the clouds above the hills turned as black as I'd ever seen. As the first drops of rain started, I retreated into the tent. A squall struck, and it emerged that my tent was not quite as well staked out as I'd imagined. 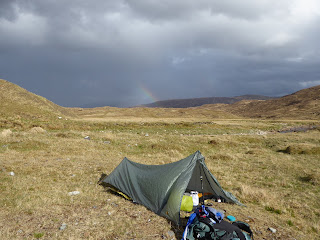 I set up camp before the storm hit, just.

Part 2 can be found here.

Posted by Middle-aged runner at 12:55