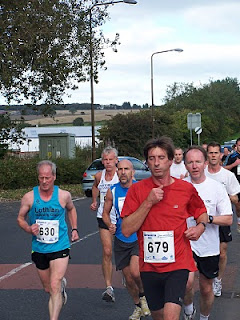 My next attempt to qualify for Boston is in 5 days.

There was no starting gun at the beginning of this year's race, just a loud tone from a starter's microphone.

M., my friend from work, went out fast. I wanted to hang back just a touch, and then pick up the pace later in the race. I didn't want to be out of breath in the first 200 meters of the race.

It was a sunny, cool September day, with no wind. By 2 km in, I caught up to M. We ran together for a bit, and then at 3 km I eased past him. Through these 3 kilometers, our pace was almost exactly 4 minutes/km.

The course went uphill in the fourth kilometer, and my pace slowed a bit. At 5 km, the course was flat again as it went along the loch. This was familiar territory, as it was part of my regular "town" running loop.

By the loch I could hear the familiar footfalls of G., a running friend from town, behind me. He eased past me, and I stuck on his heels. We'd run together many times, and although he could beat me, I was usually able to stick with him.

G. passed a few runners and I stuck with him.

After the loch, the route was uphill towards a farm. Here G. slowed a bit, and I passed him.

At 7 km the route began a slight downhill, and I picked up the pace. I didn't look at my watch.

I wasn't tiring yet, but I was going almost as fast as I could. I tried to pick off runners one at a time.

The last kilometer seemed long. We rounded the final turn and headed towards the finish line by the palace. At the "100 meter to finish" sign I started sprinting, and caught a woman just before the finish line. 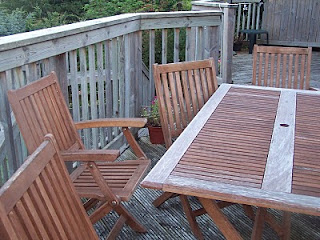 There are 7 days until my next attempt to qualify for Boston.

After feeling ok on my long run, my confidence for the marathon has been much restored. Also, my training is essentially done - I'll just be doing easy runs this next week - so there's nothing more I can do at this point.

The lesson I've learned in preparing for this marathon is that running consistently seems to help a lot. I feel stronger on my Sunday long runs if I've run the 5 previous days, even if some of these runs aren't particularly long. Perhaps my body just gets used to the fact that it has to run nearly every day, and adjusts. This agrees with something I'd heard of Bill Rodgers' training - he didn't run excessively hard, but did run consistently.

The weather has turned much cooler here at night. This morning it was 32 degrees (0 c), and there was frost on our deck table and chairs. It might be difficult to see it in the picture, but it's there. Summer is over.

Hopefully, the weather will be similarly clear and cool next weekend.
Posted by Middle-aged runner at 23:23 No comments: 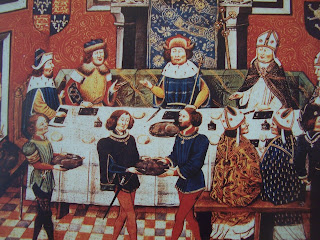 11 days until my next attempt to qualify for Boston.

Yesterday I went for my last long run before the marathon.

I treated the first 5.4 loop through town as a warm-up. I took it nice and slow. I wanted to fool my body into thinking that it really wasn't running yet.

The second lap was good. I had a niggle in my upper legs, but overall I felt good, and my pace was faster.

My third loop, up to 16.2 miles, was encouragingly. Instead of feeling gutted at the end of it, I felt like I still had energy reservers. There was some tiredness, but I was still running. Now it was dark, so I ran with my flashlight. I had a sports drink and brownie hidden in a tree at the start of each lap, and I sampled both at the end of each lap. It was a mild evening, and I ran in shorts and a synthetic t-shirt. I sweated.

On the final lap, I felt o.k. I was able to hold my pace for the most part, though I slowed on the climbs.

Near the end of the run, I stopped because a man had apparently collapsed on the pavement (sidewalk). He was older, overweight, and semi-conscious. A passer-by phoned for an ambulance.

Earlier in the day, before my wife returned, I took my children to a local castle. The children had been there before, and enjoyed showing me where the dungeon was, and how the bathrooms were just holes leading to the sea next to the castle walls. In the former dining hall, there was a nice picture of what a medieval meal may have looked like.
Posted by Middle-aged runner at 09:29 No comments:

I'm not ready for the marathon 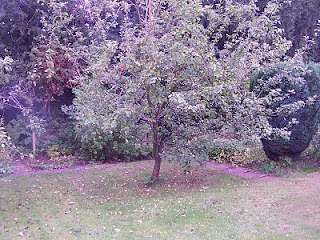 16 days until my next attempt to qualify for Boston.

I know I'm not ready. I did a long run this past weekend and suffered. Even with a run:walk strategy, 8 mins run: 1 min walk, I was reduced to shuffling at the end of my 21-miler.

My only hope, delusional as it is, was that this was just a bad run. I was jet-lagged. I definitely had a cold. I'd not run the week before.

I've tried to get in a reasonable week of running this week, but my wife is out of town for for days this weekend, so I'll be taking care of the children. Perhaps I can run around the playground while they are there or something, but I won't be getting in any serious distance.

My plan is to do one last long run on the day she returns. Hopefully it will go a little better. After that I'll do some maintenance runs, and then my local 10K the weekend before the marathon. After this, I'll do some easy runs (5 miles or less) in the week before the race.

Perhaps this is a little light in terms of tapering, but I've found that I seem to recover from runs quickly. Also, a lesson I've learned in training for this marathon is that I tend to feel strongest on my weekend long runs when they've been preceeded by a consistent week's running.

Fall is in the air here. It was 44 degrees this morning (about 8 degrees celcius), and the house was a bit chilly. The trees in our garden (backyard) are starting to colour a bit and shed their leaves.
Posted by Middle-aged runner at 12:32 No comments: 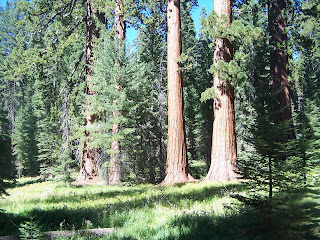 23 day until my next attempt to qualify for Boston.

I was away for the last 10 days, ran only 2 of those, and feel well behind with my marathon preparation.

My interuption was a long-planned backpacking trip to one of the most spectacular backpacking areas in the world. I went with some family and friends, and because of an injury to one of our party, our 5-day backpacking trip was curtailed. In the end we did 2 days of backpacking, 1 day of hanging around our camp and swimming in a crystal clear river, and 2 days of day-hiking.

I'm counting some of this as cross training. We were at elevation for much of the trip, and on some of the hikes we climbed a good ways.

But all of this isn't running.

My plan is to get a good week in currently, and go for a 20-miler this weekend.

Next weekend will be disrupted as my wife is out of town, and I'm on child-care duty. Should I get a baby-sitter so I can go for my long run? Maybe take the plunge on a treadmill? At the moment, I'm just planning on postponing my long run until the Tuesday that she returns.

The weekend after this I have my local 10K. It's also the weekend before the race, so I can't really squeeze in another 20-miler. Then some easy runs. Then the race.

So, that's where I am. I'll do two more 20-milers, maybe, and try to run consistently - that is, every day - for the next 3.5 weeks. I'm hoping that at the end of this time I'll be feeling confident.

But I am haunted by the woods. As I take the busy train to work, or drive on the rainy highway, I keep going back to wilderness through which we backpacked. I want to go back - to spend more nights in my tent, and more days on the trail. We just scratched the surface of what was there. I look at my map of the area and devise alternative routes, temporarily suppressing the knowledge that I won't be back for a while.
Posted by Middle-aged runner at 09:41 No comments: