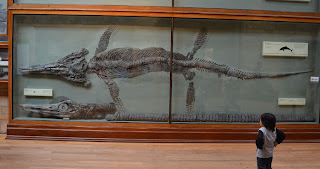 Last week, my lung problems started to return. I tried an easy five mile run on Friday evening, and came home out of breath and coughing. I could not do parkrun on Saturday.

However, this week my lungs improved, likely because the steroid inhaler was doing its thing. Thus, I was able to make a third attempt to improve my 5k time.

Training-wise, the week was mixed in part because of Christmas:

The parkrun was in England, with my wife and brother-in-law. It featured two laps on tarmac, and then two muddy laps of a large field.

I wasn't really expecting to improve my 5k time on this effort, as I suspected that my lungs were not fully back after last week's decline.

The weather was good, but the mud was slick. My time was 22:22. This was 11 seconds slower than my last effort, though it is difficult to compare because the course was different.

Two positives: I was able to run this week. I finished in 15th place, out of a field of 89.

Earlier in the week we visited the National History Museum in London. My son and I particularly enjoyed the various fossilized sea reptiles mounted on the wall. Earlier this year I'd read about the discovery of these on the England coast in a excellent book entitled The Dinosaur Hunters. It's an account of how early discoveries of large bones, many made be amateur fossil collectors, challenged the views of the Earth's age and biblical accounts of creation.

When snapping this photo, I did not notice the small child who also stood in wonder at these creatures.

Posted by Middle-aged runner at 00:59 No comments:

Do sick people think they are well? 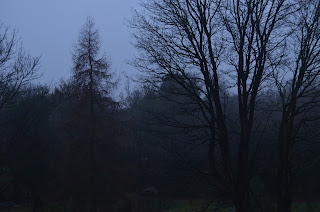 After a series of breathing problems this summer, the GP suggested I might have asthma.

But I recovered. For three months after the summer, there were no problems. I was back to running, and racing.

During that time I took a mannitol challenge. This is a test where you inhale increasing concentrations of mannitol (a sugar like substance), until you have difficulty breathing. I inhaled up to the highest concentration without a response. This suggested that my lungs were not overly sensitive, as they are in asthma. Still, the test is not definitive.

All during those three months, I took two puffs of my steroid inhaler in the morning and in the evening. After a while, this seemed unnecessary, but I thought I'd continue until I was told to stop by the consultant. I recorded my peak flow each morning and evening, and these remained in the 500s.

I had a meeting with a lung consultant two weeks ago. I felt that this was probably superfluous, but it had taken a while for this appointment to be scheduled, so I wanted to hear what he had to say.

He asked how I was feeling and I told him I was fine.

He suggested, as I suspected, that I reduce the steroid inhaler dose to one puff in the morning and evening, and then come off of it altogether.

I asked if perhaps it really wasn't asthma, and that I'd just had bad luck with some chest infections.

He thought that was possible, but the pattern of my peak flow reading from my last bad patch looked like the an asthma response. Also, I'd responded well to steroids. Three times.

In any event, I was to see how things went with a lower dose of the inhaler, and then without it.

One puff every morning and evening went fine. Again, no problems.

And then I stopped using the inhaler altogether.

The first sign of a problem came after my track session last week.

When I arrived home, I was coughing. My wife noticed.

Still, I felt well. On Friday night I noticed just a slight wheeze during the night. Again, because I was feeling well, I didn't think this was anything.

My parkrun on Saturday morning was fine, if a little slower than expected.

On Saturday night, I was out a bit late for the running club's Christmas dinner. That night, again, there was a little wheezing, but it had been a full night, and I'd walked home from the pub.

On Sunday night the wheezing was clear. On Monday, I recorded my lowest peak flow (450) for three months.

I called the consultant.

He listened to my symptoms. He also told me that my blood tests had come back, and that I did not have any allergies. However, my eosinophils (white blood cells) were elevated.

With the reappearance of symptoms following my cessation of the inhaler, and my elevated eosinophils, he was confident in his diagnosis: asthma.

I was to go back on the inhaler immediately.

For three months I had begun to believe that my previous breathing problems were in the past. I was well. But a few days without medication revealed that this was not the case. And I wondered if this was the case for other conditions. If you are feeling good, it is hard to believe that anything is wrong.

The days are very short now. The other morning, at 8:30, it was still largely dark outside when I took a photo of the back garden


Posted by Middle-aged runner at 13:58 No comments: 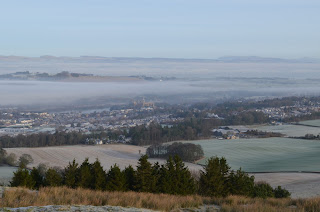 So this week featured a second attempt to improve my 5k time.

After missing Parkrun last week, I was ready to race this week.

I ran a 1.75 mile warm-up in the woods of the park where the race is held. The park features a large woodland, and I ended up on a trail I had not seen before, and had to scurry back for the start of the race.

At the start, I tried to go out at an even pace. There's a graded hill in the first kilometer, but I ran steadily.

In the second kilometer, the terrain flattens out a bit as the route travels through the woods. Again, I tried to run evenly, but fast. Probably, this is a point in the race where I could cut some time.

There's a descent in the third kilometer, and I tried to open up my stride a bit.

In the fourth kilometer, there's what's locally known as "heartbreak hill". It's a steady pull of about 200m, maybe a little longer. Here a kid passed me like I was standing still.

In the end of the fourth kilometer and into the fifth, there's a steady descent. Again, I tried to open it up here again, once I regained my breath from the hill. The kid that had passed me was stopped at the side of the trail, trying to regain his breath.

I tried to kick the last 200m meters, just to shave off more time.

So, my attempt to run a faster 5k has led to a slower 5k. I was 10 seconds slower than my last attempt.

I felt good during the run though. My legs felt strong, and perhaps some of the track work is filtering through.

I'm patient, and I know that the training I do on any given week is not going to show up in that week's 5k time.

My suspicion, however, is that it is not my legs that are the problem.

I went to the lung specialist two weeks ago, and he suggested we cut back on my inhaler, and then stop using it for a bit to get a clean lung-challenge test in a few weeks. The problem being the last lung test I did I was fine, but I was still using the inhaler, so it may have masked any over-sensitivity in my lungs.

I dutifully cut back on the inhaler for 10 days, and stopped using it altogether earlier in the week.

But I've started to wheeze a bit in the evenings. And to run slower. And I know how this movie goes...

On Sunday, I climbed a local hill with my family. It was a cold, frosty morning, and the mist hung close to our town below.


Posted by Middle-aged runner at 10:24 No comments: 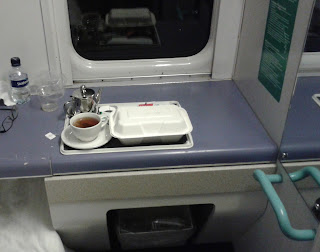 My quest to improve my 5k time was thwarted this past week.

On Friday, I was at a meeting out of town, and my plan was to take the overnight train back to Scotland in the morning. I'd arrive in Edinburgh at 7:30 A.M., be home at 8, and then make my way home for the Parkrun 5k at 9:30.

The train left London on time, and I settled in to my small berth. It was not much more than a bunk and a shelf, but I had it to myself. There was some stopping and starting during the night, but for the most part I slept. I could hear the rain and wind lashing the train as we made our way north.

I woke fully at 6, and left my berth to get a coffee.

I ran into the host for our carriage, and she informed me that there had been problems in the night. A train had broken down in front of us, and we had switch lines. We were now going to Glasgow. Worse, we were still in England, and several hours behind schedule because of the speed restrictions now in place.

The host brought a tray with breakfast: tea and a bacon roll (sandwich). Outside it was still dark.

When the daylight came, the impact of the storm was apparent: fields were flooded with brown water, and the river that paralleled the tracks was over its banks. Some roads were under water, and the water was close to several houses. I left my berth and was looking out one of the windows when another passenger told me to look down at the adjacent rail track. The two rails served as the banks of a stream rushing down the track. Later in the day, after I'd passed, the line was closed.

The time for Parkrun came and went, but I reached Glasgow at 11 a.m., and after a number of subsequent train cancellations, arrived home at 3 p.m.

Posted by Middle-aged runner at 13:14 No comments: