A run along the coast 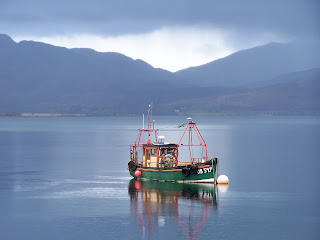 59 days until the Boston Marathon.

My alarm went off at 6. Reluctlantly, I got out of bed, gathered my running clothes, and took them to the sitting room to dress. We were staying in a small chalet, and I didn't want to wake my wife by dressing in the bedroom.

The chalet was cold as we had turned down the heat for the night. It was near the coast of Scotland, and we'd travelled there for a long weekend during the children's half-term holiday. (Half-term is a week off from school, for no apparent reason, half-way through the school term. I don't remember such breaks when I was a child; I suppose it's a British tradition.)

I made a cup of coffee, and ate a cinnamon whirl that was left in the kitchen. The children started stirring a bit, perhaps excited by waking somewhere new, and I told them it was too early to get up. They agreed, and closed their shared bedroom door, but I could their quiet conversation continuing.

It was dark outside, and cold. It had rained the night before, but this had cleared, and now the road was icy in places. I had gloves on, but my fingertips were cold.

The road was a single lane farm track. I chose to stay on this, rather than head onto busier roads, as I was unlikely to encounter any traffic. I left a bottle of diluted juice and a snack bar behind a sign near the side of the road. My plan was to run to the end of the track - about four miles - and then back, and then do it all again.

What does one think about on a long run? Initially, I thought about how unnatural it was to be up and running in the dark. It was almost if you are running in secret. I then thought about how, as I age - I'm nearly 45 now - my preferences have insensibly become more domestic, maybe more staid. For example, air travel used to be wholly exciting for me, and it still is to an extent. But now it's tinged with a dread of jet-lag and the fatigue of travel.

The road led through pastures and bits of wood, with only the occasional house. Suddenly, at a curve in the road, I could smell the sea. It was dark out still, but there was a light from a small boat in the bay. A low cloud hung over open water at the end of the bay.

Up ahead was a light near the shore. As I approached, I could see that it was a red telephone booth, with a light on inside. Next to it were lobster traps and buoys. One could leave the phone booth and in five strides be on the water's edge.

The road narrowed, and ended in a fenced driveway. I turned, and headed back the other way as it started to get light.

Later, after the run and breakfast, we took the children to a sea-life center. It had a trail next to the shore, and I took a picture of a fishing boat anchored a short distance away.
Posted by Middle-aged runner at 00:00 No comments:

The dark days are ending 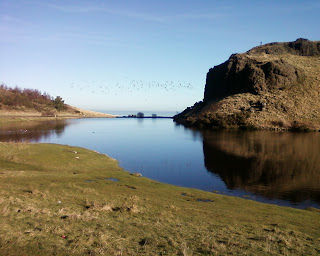 67 days until the Boston marathon. Oh my.

Scotland is unexpectedly north. I mean, if you were to draw a horizontal circle around the globe from where I live, you'd hit Hudson Bay and southern Alaska.

As a consequence, although we don't get unduly cold winters (because of the Gulf stream), we do get the short days, long nights, and the low sun associated with northern latitudes.

December is fine. You get to the shortest day before you know it, perhaps because of the pre-holiday build-up. A tradition here that I've particularly enjoyed is the boozy Christmas party at work.

But then comes January. It's dark. It's usually rainy. And even when the sun is up, it's so low in the sky that it gives little warmth or brightness.

I went for run at lunch-time today, as it was my only chance for the day.

I jogged from the building where I work, across a few blocks, and headed into the park in the center of Old City.

For the first time in awhile, the sun was out, and the light felt warm on my face. I seemed to hear birds for the first time this winter. It wasn't spring, but there was a noticeable difference in the air. As I ran around the park, I took off my head-band and gloves because I was warm.

As I rounded one turn in the park, I startled some sea gulls who had been resting in a pond there. They took flight. The light was good, and a bit of sea was visible in the distance, so I stopped and took a photo.
Posted by Middle-aged runner at 11:57 No comments:

Running in the rain 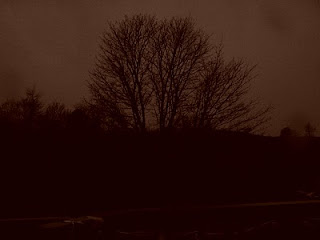 73 days until the Boston marathon.

I've had a tired, rainy week of running. Last Sunday night I did a 16.2 mile long run. It was made up of three of my 5.4 mile town loops. I felt good - even strong - on the second loop. I listened to The Extra Mile and Pheddipidations podcasts while I trotted away. On the final lap, however, my pace slowed dramatically in the last two miles. I wasn't at the wall, but it was a tired finish.

Monday was my scheduled day off.

Tuesday was my regular full-court basketball game with friends from work. There were only six of us, so there was a fair bit of running in the hour and a half we played. I count this as cross training.

Wednesday I did an 8-mile run on The Road - a long hilly road behind my workplace - with my Work Friend. It was raining and dark, and on the four-mile outbound segment, my legs were tired. On the way back, we faced a stiff wind. My nylon running trousers were soaked and stuck to my cold legs. My fingertips were numb. There was nothing to do but to keep moving. Afterwards, we enjoyed a welcome pint in the pub.

On Thursday the rain was coupled with gale-force winds. My active pair of running shoes were still wet from the day before, so I put on an older pair. I was intitially thinking an easy-paced town loop, but was slightly worried about falling branches near the loch. Instead I did four miles through some of the neighbourhoods in town.

Today, Friday, my wife was leaving for a work trip in the evening, so I had to run at lunchtime. There's a track near where I work, and I did a warmup mile, and then 7 Yassos (800 meters hard, with a 400 meter recovery). There was a driving rain, and for half of each lap around the track I headed into the wind. My clothes were wet, and I felt tired. Near the end of these intervals, however, I did start to feel a little stronger.

So, I've been getting my runs in, but they haven't felt easy.

Tonight, I'm going to relax with my current book, Life of Pi, and a beer.
Posted by Middle-aged runner at 09:26 No comments: