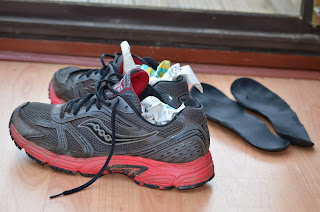 The 20-miler is a milestone in each training cycle. Once you reach 20, you are getting close to the end. For me, in this cycle, distances of 14 miles and beyond have been hard work. I've done these runs, but each has been a struggle. Is it my age?

In any event, I headed out this morning for my second attempt at a 20 mile run in this training cycle. My first attempt two weeks ago was a failure. This week, I'd trained with the thought of getting this long run done. I did 9 on Tuesday, 13 on Thursday, and a recovery 5 on Saturday. Lots of rest, some mid-week distance - I was all set.

I met S., a friend from the running club, at 9 a.m. It had been another stormy night, and the wind was still up, but at least it wasn't pouring yet.

I'd run a mile to reach our meeting place, and then together we started a 9 mile loop through the countryside and town. It was a hilly route, but because it was varied it seemed to pass quickly. S. is training for an Ironman, so I was interested in all the work he was doing. By comparison, a marathon seems small beer. I felt a little wave of tiredness at the end of the loop, but focussed on the Snickers bar I had stashed at the loop's start.

The plan was to run two of these 9-mile laps, and the first lap passed as we chatted. The wind was stronger now, and it was spitting out. S. was strong on the second loop, and I felt good as well at its start. We descended into town, and S. seemed to pick up the pace slightly - or I seemed to fade a bit. At 2 hours we'd done a bit more the 15 miles. As we ran through the woods nearing the end of the second loop, my legs were heavy, and I could not keep up with S. He was only a few meters ahead, and probably slowing so the gap wouldn't grow, but I couldn't close it. Now, the wind was howling, and seemed intent on keeping us from finishing the last meters of the loop.

But we finished it. I finished my Snickers, and we sheltered behind a tree as the heavens opened. Luckily, we each only had a downhill mile to do, though in different directions.

On my own, I jogged down the path back to town. Driven by the wind, the rain stung. My running trousers stuck to my legs. The water ran down them into my shoes, though these were already sodden. I slowed dramatically on the little climb near my house, and then strode out a touch for the last quarter mile.

And then it was done. 20 miles. I was soaked and cold, and my wife helped me peel off my gloves.

Later, after lunch and some time playing with the children, I took the inserts out of my running shoes, and stuffed the shoes with last week's newspaper.

Posted by Middle-aged runner at 10:07 No comments: 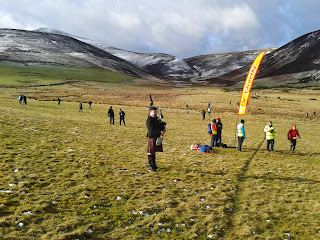 My Sunday long run this week was a struggle, yet encouraging.

This wasn't too daunting. However, I'd run a tough hill race (the Carnethy 5)the day before. The race was only six miles, but included 5 hills, and lots of wind, snow, and mud. It's the first big race in the Scottish hill running calendar, and a piper leads the ~ 500 runners to the start.

After the race, in the evening, an unexpected opportunity to go to the pub arose. My children were both invited to a sleep over at their friends' house. We rarely have a night to ourselves, so were eager to go out. It was great to settle in the pub for a chat on a February night. But it was a later, more beery night than is usual for me.

So Sunday came, and I wasn't in any rush to run in the morning. I went to the grocery store, cooked a chicken, and played with the children (both were back).

And then it was time to run.

A canal runs through our town, and on its bank is a packed gravel tow-path. This runs for miles in both directions, and is a good, traffic-free place to get in some distance. Also, it's flat. After the hill race, I wanted some easy miles.

I measured and out-and-back distance on Google maps, and then headed out the door. On the canal, I listened to Steve Runner's Intervals podcast. When it finished, the battery in my shuffle finished as well. I was a half hour in.

Still, I felt good. I reached my turn around point at 1:04, and by now it was getting dark.

I picked up the pace a bit, as I was eager to get home. I was carrying water with me, and had a drink.

By mile 10, it was quite dark. Also, I was slowing. Why hadn't I brought a candy bar? I could really have gone for a banana Power Bar, something I'd been given in last year's triathlon. Was this what it feels like when your body switches from burning glucose to burning fat?

The puddles on the tow-path were annoying. They were getting difficult to see, and avoiding them was tiresome. It was a clear night, and the temperature had dropped. Even with gloves on my hands were cold.

I started thinking about the last two miles of the marathon. I'd be tired, just like I was at this point. Could I muster the strength to run strong?

I tried to run evenly, like I want to do at the end of the marathon. I reached mile 12 of the run. Just two miles to go - one mile of canal, and then one mile of road back to my house.

Then, I started to feel ok. At mile 13 I picked up the pace, and ran strong back to the house.

I was tired, but instead of crumbling when the fatigue hit, I was able to run through it. So, maybe, the fitness is slowly coming.

Posted by Middle-aged runner at 00:16 No comments: 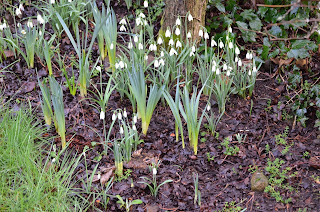 62 days until the London Marathon.

One thing I'd always heard about aging, is that time seems to speed up.

Unfortunately, it's true. I don't know what happened to last year. Now, whole months fly by. OK, I'm getting my runs in, but this month will be gone before I know, so I'm going to pack it full.

I had a good week of training. After last Sunday's tiring 18-miler, I took two rest days. The week was as follows:

So, for the first time, I was close to the Pftizinger's schedule. And I'm starting to feel the miles. Before the parkrun yesterday, I was brimming with running - I wanted a race. So, although it hasn't felt like I've been making progress, the fitness may be coming.

Today's 16-miler was hard, and I was sore about 10 miles in. Perhaps I'd gone too hard in the parkrun the day before? My total running time for the week was 6:41.

Though it's been raining a great deal for the past two months, the days are getting longer. And occasionally, there's an early bloom on a tree, or patches of snowdrops - like these in our garden. The winter is starting, slowly, to lift.
Posted by Middle-aged runner at 08:38 No comments:

Hitting the wall on my attempted 20 mile run 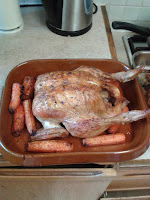 69 days until the London marathon.

The first loop was ok. Midway through, I bumped into a friend, J., who was out for a long run as well. I joined him on his loop, and then we completed mine. J. is fast, and his pace on the long run was a touch faster than mine. So, the first loop was ok, and with the additional bit, came in at around 7.5 miles.

On our second loop we met another friend, D., who was also out for a long run. He joined us. I was tiring on this loop, but it was great to run with others for a change.

There was a gusty wind for half the loop, and it started to sprinkle.

We completed the loop, and I took a sip of water from my stashed water bottle, and a bite from a snickers bar. 12.9 miles in the bag.

I began to flag on the third loop. J. pulled off, as he'd completed the time that he wanted, and D. pulled off a bit later to head home. I pushed on through town, but my pace dropped dramatically.

I took a 30 second walk break. I resumed running. The wind was gusting, and the rain was soaking through my gloves. My plan was to stop at the store at the end of the run to pick up a newspaper and butter (for mashed potatoes), but the store was near, and I was almost at a shuffle. I probably could have pushed on for 20 miles, but it would have cost me dearly. I didn't think there'd be a dramatic training benefit from running to exhaustion.

At 17 miles, I stopped at the store. My hands were stiff, and I couldn't get my gloves off. Finally, I tugged one off with my teeth. I gathered a newspaper, butter, and some chocolate chip cookies and headed to the check-out. The next challenge was to get out my cash, which was in my zippered back pocket. The colors in the store were brighter than usual. I couldn't get my hands to undo the zipper. I held my running trousers with one hand, and then pulled the zipper with the other. I got the wrinkled bill out and smoothed it out for the cashier.

I started running again, and shuffled the last mile to make it 18.

At home, I was spent. I drank a coke, and had a few chips. The house smelled of roasting chicken. I basted the chicken, had a hot shower, and then cooked the mash potatoes. My wife, daughter, and son arrived after a bit, and we had a welcome hot meal.

For the last two miles of the run today I was at the wall. Perhaps I'd gone a little too fast; perhaps I'd done too many miles this week. (Though my running time for the week, 6:40, was down on last week, all the miles were on the road and track). At the moment, I'm not too worried about one tired run - I always seem to have at least one or two of these every training cycle.

Posted by Middle-aged runner at 09:41 No comments: