Running without a clear goal 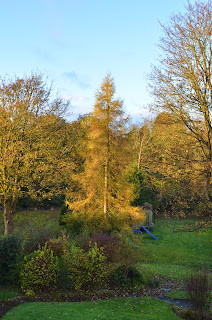 Live each season as it passes; breathe the air, drink the drink, taste the fruit, and resign yourself to the influence of the earth. Henry David Thoreau, Walden

The sun is lower in the sky here in Scotland, and the shadows are long. The temperatures have been mixed; we've had some cold nights, but during the day it has usually been mild.

November can be a slightly bleak month, but the light can also be wonderful. It seems like a time to take stock of the year, and plan for the next year.

Running-wise, I'm trying to get back to consistency. I'd like to be around 30 miles a week, with at least one swim in addition.

As the year winds down, I've started thinking of goals for next year.

I could do another marathon. I will do some hill races.

At the moment, the only clear goals are:

These could be enough, but I rather miss the structure of a marathon training cycle to get through the winter months. Also, the miles I put in for marathon training pay dividends for everything else. I'll do a half in March, so that could be a sufficient goal.

After some disruption from travelling, I am trying to get back to normal sleeping. The long dark nights are helping.
Posted by Middle-aged runner at 09:14 No comments: