A winter camp and run 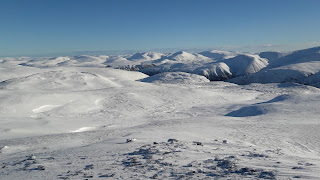 The view from Carn a' Chlamain


I've set myself the challenge of camping once a month for a year. February is the sixth month of the challenge, but the weekends were filling quickly. My best chance to get out at the very beginning, on February 3rd.

I'm also in the process of training for some races, including the Stirling Marathon and a bigger hill race towards the end of the season. To combine the two, I planned a trip up Glen Tilt, with a wild camp on Saturday night, and a run up a hill Sunday morning. 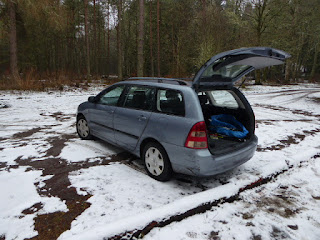 Getting ready to set out

I set out after lunch on Saturday, and there was snow on the ground when I arrived at the Glen Tilt car park. I packed up, and headed along the River Tilt. 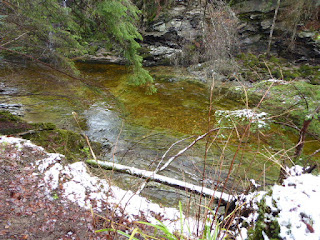 I walked for a few miles along a track, and noted several good places to pitch my tent in the trees. I walked myself out of these, however, as I continued up the Glen. After 4:00, I needed to make a decision on where to camp, and opted to backtrack to one of the sections of woodland along the river. Part of the aim of the outing was to have a good evening in the woods, and I've made the mistake previously of passing up good tent sites in the search for the perfect site, only to be forced to settle for a not-so-good site. 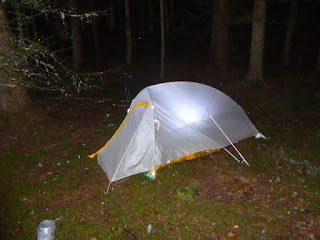 A good pitch site near the River Tilt

I found a flat, clear spot just above the river, in the trees and out of view of the track. Darkness came quickly, and I boiled water for my ramen noodle soup, in which I dipped a small ciabatta loaf. I'd also brought a tin of beer to round out the meal. It was drizzling, and the trees were dripping water, but the tent kept me dry.

The evening wasn't as cold as anticipated, and I was plenty warm in my combination of a summer sleeping bag and a three-season bag. I settled in with The Rosie Project, and read for a bit before drifting off.

Somehow, I ended up sleeping in until 7, and then dressed and found a tree stump to sit on while boiling water for my instant oatmeal and coffee. The moon was out.

As dawn came, I rearranged my gear, changed into running clothes (with the addition of a thin insulation jacket) and headed up the glen. 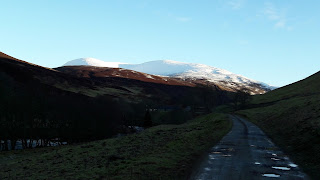 I met a fellow walker who was also heading into the hills, and let him look at my map. He didn't have one because he'd planned on walking in the Cairgorms, but couldn't afford the petrol to go all the way up there. 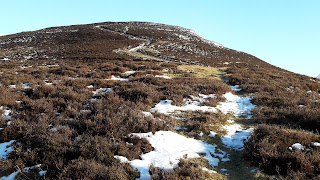 Start of the climb up Carn a' Chlamain

I followed a track up the hill, and the patches of snow increased. Eventually, the ground was covered. 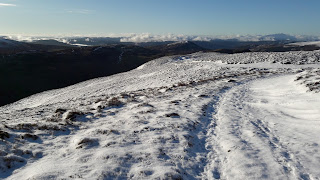 Looking back down the way I'd come

No one had been up the track since the recent snow, except for the snowshoe hares. One dashed away before I could get my camera out. 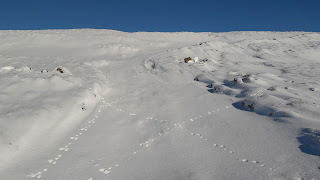 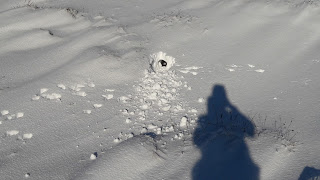 The hares dig holes in the snow for shelter

I pushed on, and the snow alternated between being windblown and hard-packed, and soft and deep. The summit was reached and I was able to take a more direct line on the descent, running through the snow. It filled my gaiters, which weren't suitable for my running shoes. Eventually I took these off.

I descended out of the snow, down along the river, and back to my tent. 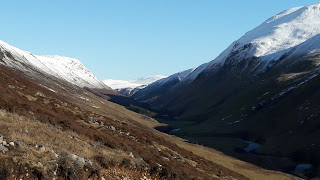 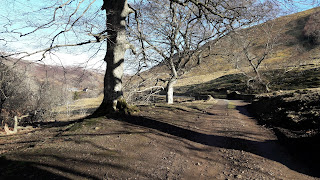 The track through the glen felt like it was from a different age. 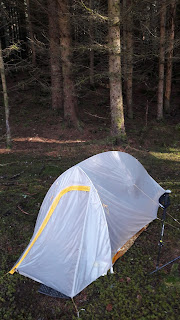 Back at the tent

When I arrived at camp, I changed to dry footwear and put on my down jacket. I made a cup of coffee and had a sandwich, and then packed up and walked the few miles back to car.

All in, a nice evening and a glorious day in the hills...


Posted by Middle-aged runner at 01:03 No comments: