My unexplored back yard 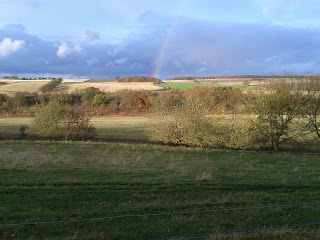 In November in Scotland, the days are short. It's just light now, at 8 a.m and it will start to get dark by 4. A month from now it will a lot worse.

So, on the weekend, you have to get out shortly after lunch if you want to see some daylight. With limited time, it's easier to go nearby, rather than driving someplace.

Our house backs onto a river, and beyond that there are farms and a path that follows the river. Though it is so close, we rarely explore this opposite bank because it's about a 1/2 mile to the bridge over the river.

This weekend, though, I wanted to check it out. With my son, we rode our mountain bikes across the bridge, and then up the path. It became muddy, so we left our bikes among some trees, and continued on foot.

As we crested a hill, you could see rain clouds in the distance. The low November sun gave long shadows, but a rainbow could be seen in the nearby hills.

Posted by Middle-aged runner at 00:16 No comments: 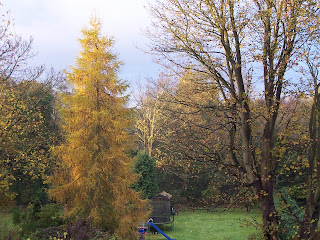 Late fall has a good feel to it. It gets dark early. There are some leaves left, but they are in the minority. It's colder. It feels good to be inside some.

My running is ticking over, and I am starting to think about my plans for next year. At the moment I haven't been terribly focussed - I want to start many things - read several of the books in my bedside stack, build a shed, fly-fish - but just don't have the time. Or, I don't make the time.

I was drawn out to my deck this morning by the colours of the trees. The larch tree was a golden yellow, and a sycamore towards the back of the yard was in the sun.
Posted by Middle-aged runner at 02:03 No comments: