A run in the hills


I have a long hill race next month, and will be away early in the month, and so needed to get some distance in now to prepare. High pressure has been sitting on Scotland all week, and this made for perfect conditions for a much-needed longer run in the hills.

I drove to the small town of Tillicoutry, and parked on a street that bordered a small creek. 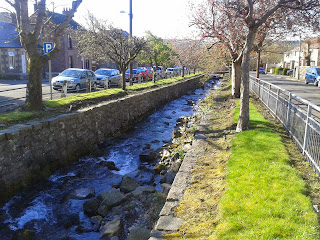 Facing the other direction, the hills awaited. 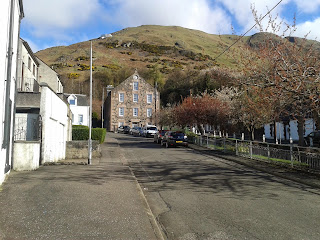 After adjusting my running pack, returning to the car to get my headband and gloves, I started the climb. I was hoping to do 12 miles or so, and wasn't worried about pace. I just wanted to get some hills in my legs, even if that meant some walking.

I quickly warmed and shed a long sleeve shirt.

Nearing the top of the first hill, I could look back down to Tillicoutry and the surrounding countryside. 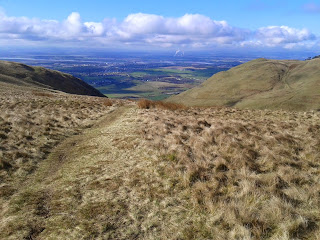 I headed deeper into the hills. I stopped to chat with an older walker who was heading over a few of the hill tops, and then carried on. Because of the dry spell, the ground was mostly firm, with just the occasional boggy bit. I headed up and down, and finally descended near Glendevon resevoir. I was six miles in, and hungry. I polished off my Snickers bar, and wished I'd had something more to eat. 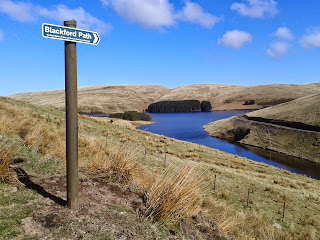 I start to head back, and took a road that led through a wind farm. Up close, the windmills were huge. 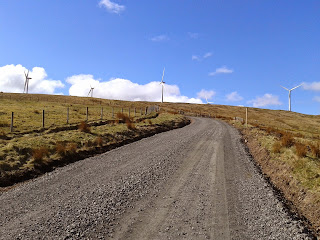 After the windmills, I took a track to the top of the hills, and then followed a good path to the summit of Ben Cleuch - the highest hill in this group. Looking towards the north, I could just make out the remnants of snow in the highland mountains. 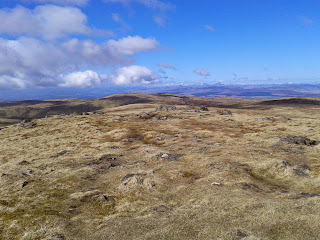 And then there was a long descent. I was feeling my lack of energy at the end, but had a coke and a breakfast bar when I reached my car.

My race next month will be about 18 miles, but this 12 mile run gave me a some cause for optimism in my improving fitness.
Posted by Middle-aged runner at 10:27 No comments: 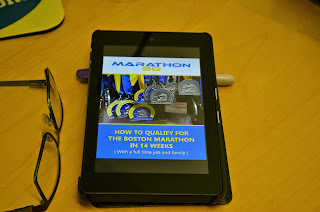 The first time I tried to qualify for Boston, I failed.

The second time, I did better.

The race itself, however, was a struggle. As I neared mile 25, my paced dropped to a dead-man's shuffle. I pushed on to Kenmore Square, and to the finish, and then had a much need lie down under a tree in the Boston Gardens. Still, I was there. I'd finished perhaps the best marathon in the world.

But how do you get to Boston? Like me, you can try to guess what type of training you need to do run a qualifying time. Or you can pick Chris Russell's new book Marathon BQ: How to qualify for the Boston Marathon in 14 weeks.

Chris Russell is the host of the superb Run Run Live podcast. He's an experienced marathoner, who has qualified for Boston several times. More importantly, he is a clear communicator, and his book provides a focused approach to running a qualifying time for Boston. 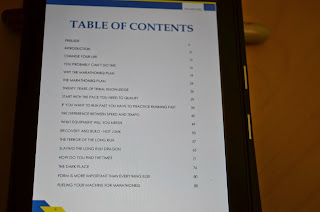 It also provides a healthy dose of motivation:

When I was 34 years old, I decided to qualify for Boston. I was a chubby, recreational runner with a young family and a fulltime job that required extensive travel. I started training to qualify early one summer. In the process of training that summer I became a different man.... I learned I was capable of inifinitely more than I ever realised.(pg. 10)


What is Russell's plan? Put simply, it's about speed. To qualify, you must run fast, and to do so, you must train at speed. The book lays out how this fits in with a balanced plan that fits in both speed and the necessary long runs.

Even though I am not training for a marathon at the moment, I have taken on some of Russell's workouts. I want to increase my speed for the half distance, and now I know what to do.

Overall, this is an excellent read, and if you are think about Boston, this book will help you get there.


Posted by Middle-aged runner at 11:17 No comments: