Running in the snow 141 days until the Boston Marathon.

This weekend we had an early-season snow storm. On Saturday morning, we awoke to four inches of snow on the ground. Today, Sunday, there were six more inches.

Since I've lived in Scotland, snow has been pretty rare. We've had years where we really only had a dusting once or twice in the whole winter. Last year was the first time in 12 years that we had a proper accumulation - we had snow on the ground for almost a month starting the week before Christmas.

So, snow is a bit of a novelty here, and my children love to go sledding in our back garden (yard).

As mentioned in my last post, on Sundays I often meet up with some friends at a local woodland park for a morning run. It's particularly fun when there's snow on the ground, so I was off at 9:40 this morning to meet them. The snow slowed my run up to the park, and I missed my fellow runners, but was able to follow their tracks. Eventually I caught up, and enjoyed a good run through nearly a foot of snow on the trails. It would have been a great morning for cross-country skiing.

The snow intensified as we ran, and when I returned, there was a harsh wind. My face was numb, and my hands were cold (my gloves, by the end of the run, were wet). Several cars were having difficulty getting traction on the un-plowed roads.

I arrived back at the house after this 12-mile run 2:07 after I'd set out. My legs
were beat after slipping through the snow for two hours.

I've been reading 26 Miles to Boston by Michael Connelly. He walks through the race mile by mile, and now that I'll be actually doing it, I'm finding the description of the Newton Hills much more anxiety provoking. The fact that they come so late in the race - near mile 21 - is a sobering thought.

I've got some work to do this winter.
Posted by Middle-aged runner at 11:32 No comments: 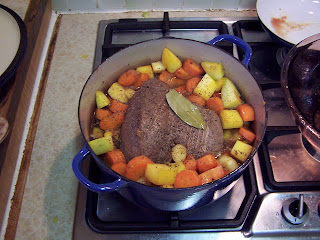 148 days until the Boston Marathon

On Sundays I like to cook a "Sunday lunch" - I think it's kind of a British tradition. In the fall and winter, I also meet some friends from our town's informal running club at a nearby woodland park on Sunday mornings, and we do a 6 mile run through the woods.

I sometimes combine both by setting up something to cook before I leave, running, and then coming back for lunch.

This week I cooked an English pot roast. I follow the simple directions from my wife's old Delia Smith cookbook. The cover paper on this cookbook is ripped, and some of the pages are stained with food spills, but the recipes work. Basically, you brown the beef, brown the vegetables, add some stock, and bake at a low temperature for three hours.

Ahh... but when it's done, the house smells like something good is cooking, the meat is tender, and the vegetables soft. I make mashed potatoes to go with it, and serve it all with the stock and juices from the roast.

I had a good week of running: 8 miles on the track on Monday; 2 hours of full-court basketball on Tuesday (I count this as cross-training); 10.4 miles (two town loops) on Thursday, 5 miles with some Yassos (800 meter fast intervals) on Saturday, and my woodland run on Sunday (12 miles, with the run to and from the park). So, 35 miles for the week.

I haven't quite started my training for the Boston Marathon. I'm slightly reluctant to begin a schedule yet - it comes to dominate my life and instill guilt. But I'll likely start a New York Road Runner's marathon plan (from the Running Well section of the New York Times online) soon.
Posted by Middle-aged runner at 04:13 No comments: 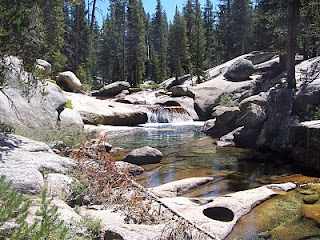 160 days until the Boston marathon.

I'd wake in my tent, warm in a down sleeping bag, on the John Muir Trail in the Sierra Nevada mountains of California.

I'd dress, and make a cup of Italian Roast Starbucks instant coffee on my backpacking stove. I'd sit under a large pine tree , on this small foam pad I found one time while backpacking, and enjoy the drink - warming my hands on the mug. My camp-mates - either friends or my wife and children - would wake, and we'd chat over breakfast.

We pack our backpacks and head up the trail to our next campsite. It would be late summer or early fall, but the sun would still be warm during the day. There'd be no bugs.

We'd stop for lunch near a clear, cool river, and I'd have this spicy beef jerkey a friend of mine regularly obtains from his local butcher. We'd filter some water from the river, and enjoy a nice, cold drinks.

After lunch, we'd walk on for a few miles. It would be hot then, but the trail we'd be on would be following a river, and we'd find a nice deep pool to have a swim in. Afterwards, we'd dry off by laying on the rocks in the sun.

We'd continue on and arrive at our camp for the evening. Under some large pines, we'd find flat bits of ground on which to pitch our tents. We'd cook, perhaps have a fire if there was an existing fire circle, and maybe a bottle of Sierra Nevada Pale Ale that one of us would have carried in our pack. We'd joke about the adventures of the day, and reminisce about previous adventures.

Once it was dark, we'd retire to our tents. I'd crawl into my sleeping bag, and turn on my headlight to read for a bit. I'd have a book that I'd been looking forward to reading - something gripping - and I'd read until my eyelids grew heavy and the words began running off the page. I'd turn off my light, open my tent flap, and see millions of stars in the sky. I might sleep with the tent flap open and the screen closed, so I'd get the slight cool breeze. I'd sleep well.

That would be my perfect day.
Posted by Middle-aged runner at 11:29 No comments: 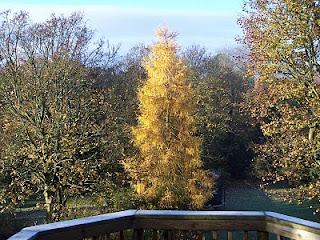 162 days until the Boston Marathon.

The horn sounded and the race began. I was towards the front of the crowd, and we surged between two traffic cones where the timing mats were placed. For the first time, the Dundee Templeton race was chipped.

It was a cold morning. I wore my Saucony shoes, and the same clothes as I'd worn for the Run of the Mill race: wool socks, running shorts, a long-sleeve shirt, light gloves, and a head band. It was sunny, and there was frost on the ground.

The first mile was largely downhill and came in at 6:27. The race is almost entirely on country roads, with a short stretch through the woods to the finish line.

I wanted to try and keep up with A., a friend from my local running club. He's generally a much faster runner than me, but I was hoping to push a little today.

Two came in 7:36. I fell in with a woman who was doing the race for the first time. I warned her to save something for the upcoming hills.

Three had a climb, and came in at around 7:40. Although it was cold, I was starting to sweat.

Mile four included a substatial climb. I shortened my stride, and tried not to lift my legs too much. It came in at 8:50.

The route levelled out a bit, and I tried to pick up the pace. I wanted to see if I could catch A., who hadn't been in view since mile 2.

I passed one runner, then another. There was a runner in a green shirt ahead of me, but he was passing people as well, and I couldn't make any ground on him.

Mile eight was flat, and slightly into the wind. I missed my split here, and after the climb back to the woods in mile nine. I passed two people who were walking in these last two miles.

The route went through the pine trees, but there was a slight uphill. I passed on last runner with 800 meters to go. With 400 meters left, I began sprinting.

The days are short now, and the sun is low. The larch tree in our backyard (back garden) is bright yellow, but losing its needles quickly.
Posted by Middle-aged runner at 11:28 No comments: 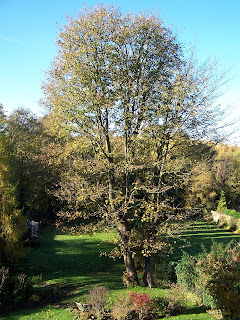 168 days until the Boston Marathon.

I've spent the whole year training for marathons, and so now I'm at a bit of a loose end running-wise.

Now that Loch Ness has come and gone, I'm back to base training I suppose. However, I'm missing the clarity of purpose that a training schedule provides. It was satisfying to enter each of my runs into the interactive RunWell site of the New York Times.

I think that for Boston I will go with the New York City Marathon Official Program, which served me well for the Loch Ness Marathon. In it, I don't start ramping up the miles beyond a baseline of 31 miles per week until late December.

The leaves on the large Sycamore tree in our garden are really dropping now. The sun is noticeably lower during the day now, the shadows are longer, and the light is different.

The clocks were set back this weekend in the United Kingdom, and tonight, for the first time, it was dark when I picked up my children from their after-school club. It was pouring rain and cold; November is here.
Posted by Middle-aged runner at 12:31 No comments: