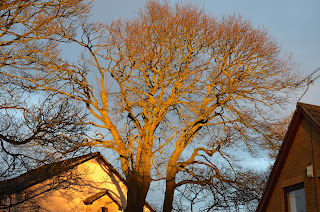 Christmas arrived all at once. My children had school through Tuesday, and that evening the in-laws arrived. The next day included a final trip to the grocery store and preparation for Christmas lunch the next day.

Activity-wise, my week has been as follows:

Mon.: no running
Tues.: swim 1600m
Weds.: 5 miles first thing in the morning (in the dark!) with two friends
Thurs. (X-mas): 4 easy miles around the loch in the evening, to get some fresh air after cooking and eating all day
Fri.: 8 mile trail race.
Sat.: no running
Sun.: 6.2 miles cross-country with a friend on a frosty morning

My knee was sore after last Sunday's run in the woods, so I was beginning to feel that I'd done too much last week (22 miles). Wednesday's and Thursday's runs were fine, though there was a little soreness. There's an annual handicap trail race nearby the next day (Boxing day -the day after Christmas), and I was keen to do it. It consists of two laps through the woods with some stiff hills. During the first lap, I thought I might be forced to pull out, as the knee was hurting, despite wearing a knee band. On the second lap, I picked it up, and perhaps because I was warm, the pain dissipated.

Walking to the store yesterday I was struck by the late December light on the sycamore trees that line our street.

Posted by Middle-aged runner at 00:49 No comments:

The shortest day of the year 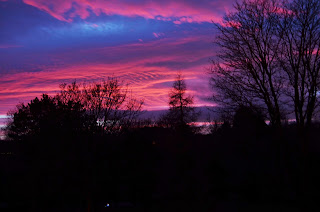 Yesterday, as I walked home from the grocery store with my 9 year old son, the sun was setting. It was 3:30 in the afternoon! Just after 4:00 I took this photo from my back door. (It was actually darker than the photo suggests - I had a 2 second exposure.)

My running is picking up. I self-diagnosed "runners knee" (as I know it wasn't illiotibial band syndrome, a pain I know well), and backed off the running considerably. Last week I ran three miles in total, and took five consecutive days off of running. Perhaps the latter doesn't sound like much, but my habit is to never go two consecutive days without running.

I was trying to listen to my body. Every time I ran, my knee hurt. There's a simple solution to this, and eventually I acknowledged it.

But this week has been better:

Monday: 2 easy miles on the track, to test the knee. It was fine. Light upper-body weights after.
Tuesday: 5 easy miles with the running club. I cut off early as I didn't want to ramp up the miles too quickly.
Wednesday: nothing
Thursday: swim 1400 meters
Friday: 5 miles on the track, some slightly faster; light upper-body weights after
Saturday: 4 miles (3.1 of which were a parkrun race); knee fine
Sunday (today): planned 6-miler on trails

Today is the shortest day of the year. How can I make it count?
Posted by Middle-aged runner at 23:44 No comments: 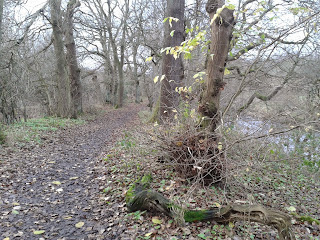 I've been nursing my right knee a bit over the past two weeks. I think I overdid it on a 10-mile run the week before last. It was hilly, on road, and I was tired. I thought I could push through - and I did - but since then my right knee has been stiff and swollen after runs or even after sitting in my office. I had a few knee twinges before this 10-miler, so I'm a little uncertain about the cause.

All this said, my consistency and fitness are coming back.

To that end, I was keen to get a few easy miles in on Saturday morning. A run through the soft ground of the woods beckoned.

The light was low, and the day was short.

In the woods there was the sound of the winds on the bare trees, the branches rubbings against one another, and the skittering of leaves under foot. I took it easy, but on flat stretches picked up the pace a bit. I did 16 minutes out, and 15 back.

I could feel my knee, but it was bearable. I'm not sure if activity or rest is the best bet now for it, but I really don't want to rest.

Posted by Middle-aged runner at 07:32 No comments: