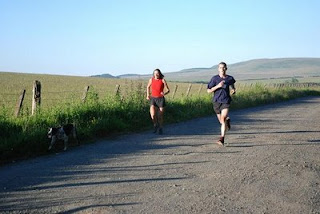 I don't know how I did in this race yet, but I ran hard. It was another glorious, Scottish summer evening for this hill race.
It may look like I'm passing the woman in the picture with authority, however, she wasn't in the race (but just happened to be jogging on the race route), and she was running with a 3-legged dog.
Posted by Middle-aged runner at 15:04 No comments:

My strategy for the East Kilbride half-marathon, my third ever, was to go out slow.

My first mile was 7:09. The temperature was cool, and the skies overcast. It was a perfect day for racing. I chatted with a woman who's sister studied where I teach. It felt like I was just jogging, really, but I wanted to stick to my strategy. If I ran 7:15s or better for the race, I'd set a personal best time and break 1:35.

Mile two was slightly downhill, and came in at 13:54. However, I felt that the speed-up was due to the terrain, and not intrinsic.

Mile 4 was 28:20. The race route was made up of two loops. I wanted to stay in an easy pace for the first half of the race, and then see where I was.

I missed the sign for mile 7. Mile 8 seemed to feel very long, and I was thinking that I must, unfortunately, be tiring.

Then I saw the mile mark - 9! 1:03:21. I was feeling a little soreness in my knee, but was fine. I put my head down and concentrated on trying to catch the runner ahead of me. Once I'd real in him or her, I'd go for the next person.

As I passed on guy I asked him how it was going. "Terrible" he said, and he seemed to be struggling.

I passed an incredibly thin guy who was stopped and bent over. He passed me and then stopped again. I passed him, and headed into the stadium. As I rounded the turn toward the finish on the track, I could see the clock 1:33:42... 43.. I sprinted, and finished at 1:33:47.

So, I'd beat my previous best time by almost 2 minutes. The conditions were great, and the course was relatively flat, so I don't know how much I can credit the strategy of going out slow... but I did feel much better in the final miles.
Posted by Middle-aged runner at 12:08 No comments:

A new strategy for my upcoming half-maration

In the previous two races I've started a little fast, and then faded a lot at the end.

Now what I'm thinking is going out a lot slower, and seeing if I have more gas in the tank for miles 11 and 12.

What I'm wondering is if I started slow... really, right at my overall pace average, instead of the sub-7 minute miles I typically start with, whether I'd finish a lot stronger.

So my empirical question is: will running 15s or so slower per mile at the start save me considerably more than 15s per mile in the final miles?

I've been feeling pretty blah during my runs. I didn't get a chance for a long run this weekend, which I really wanted to do before next weekend's half-marathon race. I snuck in about 4 miles Sunday after lunch, on my way to pick up my daughter from one of her many activities. It was warm, I'd eaten too recently, and I didn't feel good.

Monday I wanted to go for my long run, but my wife didn't get home until late, so I just did my regular hill loop. This is about 6 miles with some elevation, and although I didn't feel strong at the start, I was ok at the end. Around 45mins total.

Tuesday I was going to do 10 miles on the track near work, but there was a children's track meet going on. I came home, my motivation dropped as it got later, and I ran 2-3 miles along a river path. My heart wasn't really into it.

Wednesday I had to pick up the children, but got to the track and tried for 4 miles at a sub-7 min pace. I finished at 27:45.

Now it's Thursday, and I'm not running. My thinking now, inspired by an article on this in the New York Times, is to get a lot of sleep tonight and for the next few nights. This, at some level, has an appeal: I haven't been feeling strong on my runs, and I've had some less-than-full sleep nights recently. I want to show up fo the race rested.

Tomorrow or Saturday I might go out for a jog just to keep loose. The race is Sunday morning.
Posted by Middle-aged runner at 12:47 No comments:

How to qualify for the Boston Marathon?

I haven't formally started training for my qualifying marathon yet, but it's now less than a year away.

Listening to a an episode of Steve Runner's Phedippdations podcast a little while ago, I felt that my implicit strategy for training was wrong. Steve reviewed the 9 principles of Arthur Newton, an early expert on marathon training.

One of Newton's principles was to focus on the target race, and not do other races.

Hmm. I'm basically doing the opposite.

So, these are my principles:

1) Run as many races as I can. Basically, because I like running races, because they are intermediate training targets, and because an occasional bad race is less of a big deal if its just one of many you are doing. Now, I'm not talking marathons of course, but halfs, 10-Ks, and hill races. For me, no training session ever matches the intensity of a race. My goal is to run as many races as I can.

2) Run hills. Again, simply because I like them. Aside from the physical strength gains, I think running hills makes you mentally tough (in a running sense).

3) Speed work. There's a clarity of purpose about running intervals on the track that I savour. It's just about you, the distance, and the time. It can be hard quarters, or fast miles. After a couple of sessions, you start to feel strong. For my marathon training, I'll probably lean towards running fast mile intervals.

4) Long runs. At least one of these a week - possible two as I get in real training. My goal, as mentioned in a previous post, is to build up mileage on "The Road" near my work. Today, I can run 10 miles reasonably comfortably there. The complete distance, when I can do it, will be 19 miles.

Wise and worldly runners, what advice might you impart for someone aspiring to qualify for Boston?
Posted by Middle-aged runner at 12:53 No comments: 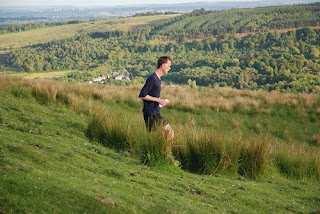 Wow, I'd forgotten: a hill race is a different animal than a road race.

It was a near-perfect Scottish evening. Some minor, brief showers had cleared, the sun was out, and the hills looked inviting.

After a slightly hectic day, I pushed my Honda Civic through the winding country roads leading to the site of the race.

I arrived in reasonable time, found a parking spot, and collected a number. The Cort-ma Law race was a 10K hill race, not far from Glasgow, and part of a series of such races taking place on Wednesday evenings.

I'd run it once before, 5 years ago, and remember it as being quite boggy and tough.

The crowd was comprised of 99 runners. Most were members of local running teams. 10K in the hills is not 10k on the roads; it is much, much tougher, and you don't get as many casual runners.

I started too fast, and, as in many hill races, the climbing started right away. I have limited ability in running uphill. I quickly reach my oxygen-debt limit. Initially there were only about 10 runners in front of me, but I quickly slowed, and many passed me. On the steepest bits of the climb, I walked. Many others were walking as well. I wanted to preserve my energy a bit. You can't really run once the slope is too great, so walking is just about the same.

Eventually it levelled out, and I started trotting. The sun was out, I was sweating, but it was a glorious evening. In one hand I carried a waterproof jacket, in the other a small zip-loc bag with a map of the route, a compass, and a whistle. These are required for all runners in this type of event.

There were more climbs, but none as steep as the intial one, and we reached the summit of Cort-ma law. The overall route of the race was a backwards P, with the start at the base of the P, the summit of Cort-ma law at the top of the P, and a loop back to the stem of the P with another hill taken in. The path thusfar was mostly been grass and dirt. Sheep grazed on the hill.

From the summit, we descended a bit, and entered a more level stretch of terrain that was punctuated by bogs. With the relatively dry weather, these weren't too wet, but there was certainly some give to the sphagnum moss.

At the summit of the next hill, I sped up on the descent and caught a few people. The route was now in the loop of the "P", and was heading back to our initial, outbound path. Usually in a hill race, I make my time on the descent, as it isn't as limited by lung capacity.

I plunged in the first bog shortly after this. I was trying to jump over it, and one of my legs went in pretty deep. I extracted myself, and continued, but lost a few places.

Another descent, along a wire fence, led to a small stream. I was again striding out a bit when I fell into a second bog. Here I scratched my leg on what appeated to be a water pipe running through the bog.

Up again, and there was a climb back to the inbound race route came back on itself, and there was a pleasant, level stretch of running along a sort-of path in the evening sun. Occasionally, one had to jump down a peat "hag" - a slight depression in the peat.

I had exerted myself, and felt occasional cramps in my calfs.

We then began the descent back to the start line, and I tried to speed up.

A woman in front of me was running strong, but I stayed with her.

A motto in hill descending is "brain off, brakes off". You don't try to control your speed too much - you just go.

I caught the woman in front of me a slight rocky bit of the path. I accelerated.

Shortly afterwards my feet went out from under me, and I fell hard. I dropped the jacked I'd been holding in one hand, and rolled several times.

I got up, ran to where my jacket had landed, and sprinted towards the finish line.

Muddy and scraped, I crossed it in 45th place, in a time of 60:40. With the drier conditions than my initial attempt on this race, I'd shaved 6 mins off of my earlier time.
Posted by Middle-aged runner at 13:16 No comments: