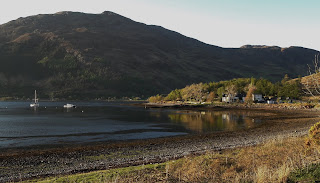 I did a half a day's work, and then changed, in my office, from my work clothes to my walking clothes. I then caught the train to Inverness, meeting a few Challengers in the carriage. At Inverness, I met an American couple doing their first Challenge, and then picked up a sandwich for dinner, and some Permetherin to spray on my clothes (to repel ticks).

The 5:00 bus from Inverness was busy, and it was just over a two hour ride to Shiel Bridge. Their, I walked to the campground, and immediately bumped into Tim, who I'd walked with last year. He was sporting a new Tarptent, and had driven up from Wales with his parents. 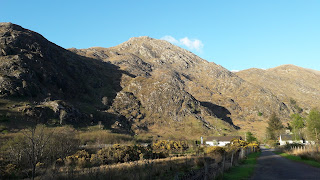 View from the Shiel Bridge camground 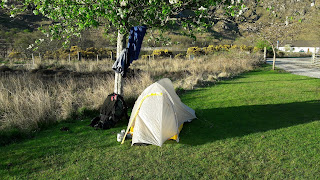 My tent, with my Permethrin treated clothes drying in the breeze


After pitching my tent, eating, and chatting with Tim and Katie, another Challenger, I walked over to the Kintail Lodge for a pint. There I met Barbara, the oldest Challenger this year (at age 81), and her colleague on the trip, Kevin. Later, three Challengers from Michigan arrived: Ray, Chris, and Chelsea. We chatted for a bit, and then I headed back to the tent in the dusk.

I packed up and head to the Kintail Lodge Hotel to check in. The check-in form was only available at 9 a.m., so I had a coffee and chatted with other Challengers as we waited. I was then off, and headed up the road and into Glen Licht. There, I headed into a stiff wind up the Glen.

In my pack I carried: my one-person tent, sleeping bag, sleeping pad, a change of walking clothes, sleeping clothes, an umbrella, a rain jacket, a lightweight down jacket, hat, gloves, stove, fuel cannister, toiletries and a trowel, a portion of a used paperback book, maps, a torch, pocket knife, food for three days, water, a water filter, some first aid items, cash, my debit card and a mobile phone. I carried walking poles.

After a few hours, I reached the head of the Glen, and took shelter in a shed by the hunter's lodge there. I sat with two other Challengers, and made a tuna wrap for lunch. Later, I realized that my pocket knife must have been left there. 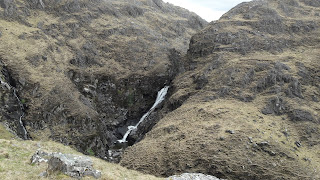 Waterfall on climb out of Glen Licht 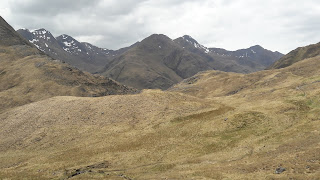 View back above Glen Licht

I pressed on, and at the plateau above Glen Licht met Bob Cartwright, owner of backpackinglight.com, and podcaster at The Outdoors Station. I'd listened to his wonderful podcasts for several years, and it was a pleasure to thank him for his work.

Later, I fell in with Stuart and Lorna, retirees from the police force in Scotland, and we had a good chat about their walking club and great places to visit as we made our way to the Glen Affric your hostel. There, we enjoyed scones and lentil soup. I pushed on from the hostel just as the first drops of rain began to fall.

I walked for another kilometer or so, keeping an eye out for a good place to pitch my tent. It was only around 5 p.m., but I didn't want to get soaked by the rain on my first day of walking. Also, I knew from my previous Challenges that there were somewhat fewer ideal places for pitching the tent further up Glen Affric. I found a good, flat stretch of grass near the river, and set up quickly to get out of the rain. Inside the tent, I rested on my sleeping mat as heavy gusts of wind slammed into the tent fly-sheet. Eventually, I roused myself to boil some water for ramen noodles, and ate these with a ciabatta roll. Later, I unrolled the sleeping bag, studied my maps for a bit, and then drifted off to sleep. 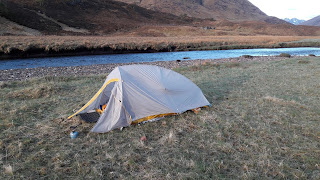 I was up early, and breakfasted on instant Starbucks coffee, an oatmeal bar, and some nuts and raisins. I packed up, and continued up the track. In the distance behind me, I could see a few other tents from Challengers that had arrived after I'd pitched yesterday.

I stopped at a mountaineering club hut, and chatted with some of the group that was there. The sun was out, and it was a promising day weather-wise.

Later, along Loch Affric, I caught up with Stuart and Lorna, and chatted with them for a bit. They'd had an early start, and then a long break in the sun to eat and air out their tents. We crossed paths for the remainder of the day.

I also met Charlie, an academic from Illinois, who was on his first Challenge. In addition to being a scientist, he was also a photographer, and some of his impressive photos can be seen here. 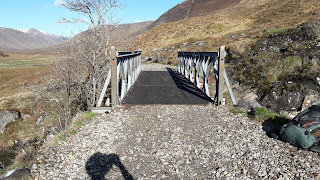 View back through Glen Affric. My pack is on the right.

I went my own way for a bit, but after crossing the river by Dog Falls, I caught up again with Stuart, Lorna and Charlie. Now, it was actually hot out, and we rested in the shade with our shoes and socks off.

Our route was on the Affric-Kintail way, and this took us up into the woods. I'd left Dog Falls, after dipping my feet in, and caught up with Charlie on the road. We chatted, and occasionally rested, and the afternoon passed. Eventually we descended into Cannich, and pitched at the good campsite there. Stuart and Lorna arrived a little later. In all, we'd covered a good distance.

I showered, and then Charlie and I headed to the pub. Later, Stuart and Lorna joined us, and we enjoyed our Saturday evening. Around 8 p.m., someone who could have been a Challenger walked past the pub, head down and looking beat. I never did find out who it was. As I went to pay, I was greeted by Rob and Thilou (the latter who I'd walked with for several days on my first Challenge). Thilou was struggling with back pain, but was keen to continue the Challenge. They walked back with us to the campground, where they were also staying.

Somehow, I took a long time getting out of camp in the morning. Eventually, by 10, I was packed up and I headed out with Charlie. Our next destination was Drumnadrochit, and again we traded places over the course of the day, chatting a bit about Charlie's college years in California. Leaving Cannich, there's a long climb on the road, and it began to rain. I pulled out my umbrella and rested occasionally during this, so as not to overheat. 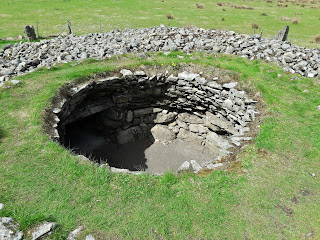 Later in the afternoon, Charlie's knees were starting to give him grief, and he waved me on. I arrived in Drumnadrochit in the late afternoon. I checked into the hostel, resupplied, and stopped at the lively pub at the back of the Benleva Hotel. I then met Stuart and Lorna at the Loch Ness Inn, and we had a very nice meal. We also ran into Thom, who I'd met two years previously. He was dressed in his jacket and hat, and has continued with his excellent blog on the Challenge. Thom was having problems with his knee, and was worried that he would not be able to continue. 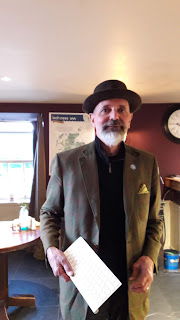 Thom, at the Loch Ness Inn

I didn't want too late of a night, so I took my leave and returned to hostel and my comfortable bunk.

Posted by Middle-aged runner at 13:10 No comments: 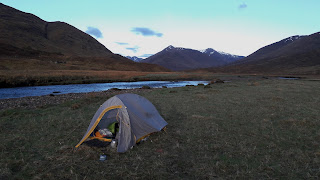 Camp in Glen Affric on Day 1

Backpacking is a process. On most trips, I learn something about my gear, my lack thereof or how my body responds to varying demands. A winner is a loser who learns the right lessons. Below I've listed a few of the things I learned on my walk across Scotland in this year's T.G.O. Challenge.

I will provide a day-by-day summary in the ensuing posts, but as an overview, I planned a route from Shiel Bridge to Johnshaven. After the relative isolation of last year's trip, I wanted a more social route. Work demands also meant that I had a very short window - ultimately just 10 days - for this walk. So here's what I learned:

1. What makes the Challenge special is the people you meet. It was such a pleasure to meet so many friendly, like-minded people from all over the world. This, I think, is what keeps people coming back year after year.

4. .... and no rest days... I could have used one of these. My legs started to lose their zip. Whereas in previous Challenges I started to feel stronger as the trip progressed, peaking towards the finish, in this trip I dragged to the finish.

5. .... and an increased risk of injury My leg extensor tendonititis started on a long day from Glen Affric to Braemar. My ankle and leg were hurting that night walking in town, and it grew worse the next day. By the final day the pain was significant. I took ibuprofen, and bought a wrap for my leg, and was able to finish. Now, at home, my lower left leg is swollen and sore. Running is out of the question, and walking hurts.

So, the take home advice from all of this is that I would not recommend a short crossing. My hobbies are hill running and marathoning, and my body still could not handle these kind of miles on this time frame.* I was able to enjoy the company of my fellow Challengers, even up to the last morning, though I was not in the full bubble of walkers.