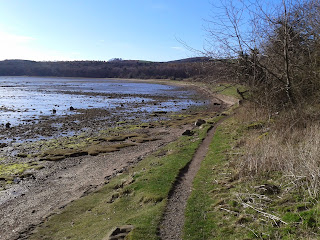 Last week was a heavy one on the Pfitzinger schedule, and it culminated in a 25.5 mile run along the coast. I didn't intend to go quite so far, but my route took me to Edinburgh, and once in town, it made sense to just continue running until I reached the train station. Though I took it slow, and stopped to take photos of my route (as seen above), my last mile was 7:40 something. So, I could do 25 miles, and I still had something in the tank. This was a big confidence builder.

This week was as follows:

So, this is it. The last long run is done, and I am now tapering. I will do a 10k race next weekend. I probably wouldn't schedule this, but it's a local race that I like.

This training cycle has been good. For a long time I felt like I was struggling, and that the miles were all hard. But, regardless of how I perceived it, the fitness has come. One factor here perhaps is consistency: I've done 4-5 runs a week, including a long run, every week since probably mid-December. I'm hoping that the volume of training will push back the wall on race day.
Posted by Middle-aged runner at 12:16 No comments:

A half-marathon on my way to the full marathon 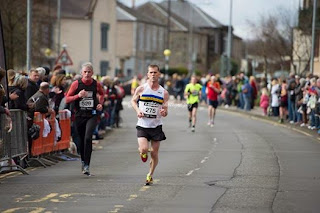 I had to pee with 10 minutes to go to the start of the Alloa half marathon.

I made my way through the crowd, back to the recreation centre that served as the headquarters for the race, and took care of business.

By the time I returned to the starting line, it was jammed with over 1500 runners. I tried to weave my way as far forward as possible, but eventually came to a standstill.

The gun went, and we started a slow jog to the start line.

My timing chip came loose in mile 2. One of the plastic ties was undone, and the other was loose. There was nothing for it but to pull off onto the sidewalk and fix it. I tried to tighten the tie, but it didn't seem to bite. Then I tucked the chip into my shoelaces. Runners streamed past. Eventually I just started to run, and almost immediately the chip came out of the shoelaces. It flopped against my shoe with the one remaining tie. I thought I'd just keep an eye on it until it fell off, and then carry it the rest of the race. Mile 2, with the stop, was 7:46.

5, with a real descent, was 6:33. Though I was in shorts and a vest, when the sun was out I warmed quickly and sweated.

The end was nearing, and I caught G., a friend from the running club.

I knew that the rest of the race was largely downhill, and so I tried to pick up the pace.

In the final turn, I kicked, and caught another runner just before the finish line. And then I was done. 1:31:33 all in.

It wasn't a p.b., but I thought I'd run well, considering the wind and my stopping for my chip. My finishing time was only about 45 seconds off my p.b., and I'd finished strong.

Posted by Middle-aged runner at 14:07 No comments:

The goal of this week's long run was to A) get in 20 miles or more, and B) spare my legs as much as possible for the half marathon race I'm doing next week.

How to do this?

The purist may scoff. However, I wanted to administer that 20-mile+ stimulus to my legs, and to experience being on my feet for 3+ hours. But I wanted to recover quickly. I've tried the run-walk-run strategy on long runs in previous training cycles, and found that the strategy allows you to extend your miles, and to do so without the debilitating exhaustion that often accompanies big miles (at least for me). Also, surprisingly, it does not slow my pace dramatically .

I ran with my birthday present on - a Garmin from my wife. It provides distance and mile splits, and also heart rate. I don't know if this is a factor in keeping the fatigue at bay, but my heart rate dipped every five minutes. My suspicion, however, is that run-walk-run primarily lets your legs recover a touch, and thereby extends the distance you can travel without exhaustion.

And today, the day after my 21 miler, I feel good.

This was my week:

Posted by Middle-aged runner at 01:16 No comments: 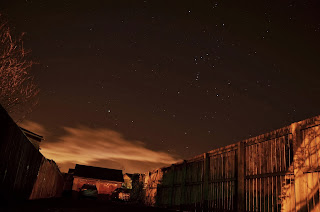 This week I turned one year older, and to mark this my wife and children gave me a Garmin.

I tried it out on my 17-mile long run with G., a friend from my local running club.

My legs felt tired at the start, and G. set a good pace. Eventually, I started to warm up, and the miles ticked by on the Garmin. My heart rate seemed to settle in at 153 or so. I felt a bit of a fade at 9, but whether it was because of the gel I'd taken at mile 6, or the Snickers at mile 12, or the mid-week medium length run, I felt not too bad at the end.

So this was my training week:

Earlier in the week, the clouds and incessant rain broke for a bit, and we had clear skies. From my driveway, the stars were bright.

Posted by Middle-aged runner at 23:04 No comments: