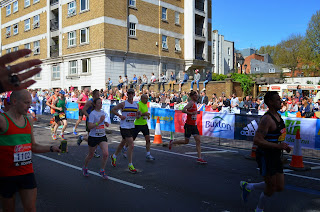 I drove down to London on the Friday before the race with my wife and two children. The British motorways are often congested, and on this Friday they were particularly slow. Once a wreck happens, the traffic can back up for miles, and because of earlier accidents, there were numerous delays. We got off the motorway twice to avoid the worst of these, a strategy that was partially successful. In the end, a 7 hour drive took over 10 hours.

We arrived in Barnes, a suburb of London, and stayed with my wife's brother and his wife. Barnes is leafy, pleasant place, and the next day we could see that the trees were in full bloom. 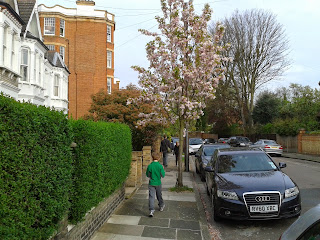 We took the tube to the convention centre to pick up my number.

The marathon expo was well organised, and I picked up my number without having to wait. We then passed through some artificial mist to enter the merchandise area. There was a graffiti wall where people could leave messages, and my children enjoyed leaving a message for dad. The marathon labelled stuff was slightly pricey, but I bought some tights for next winter. I also picked up a powerbar for the race. 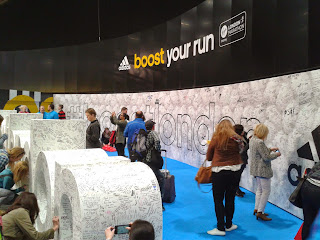 The next morning I took an early bus, a crowded Tube train, and an overland train to the start. Runners streamed towards Greenwich park, and I settled in with a cup of coffee and a cinnamon danish. I'd eaten a bowl of cereal before I left Barnes, but I was still peckish.

I lined up between the 3:15 and the 3:30 crowd, and sat on the curb. The sun was bright, and I wore a cap and sunglasses. I could feel the heat of the sun as I waited.

Nearing start time, I stood and we were led towards the start area. Runners broke into a jog, we crossed the start line, and we were off.

Ahead, there was a sea of runners. I tried to stay near the three blue lines on the road, as these indicated the shortest route. 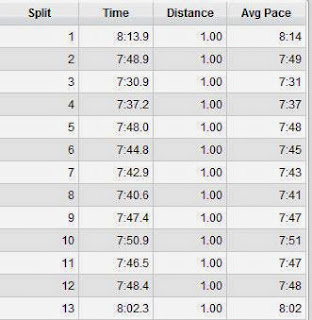 The first half was uneventful. My legs felt a little heavy in the early miles, but I thought that this would pass. My plan was to run 7:38 miles for the first 17 miles, and then 8:08 for the remainder. This plan took into account my likely slowing in the second half of the race. The crowds of runners were thick, but after the first mile I was able to run my pace. We passed Cutty Sark, where the crowds were huge. I ran into a friend at mile 9, and we chatted for a bit before I pulled ahead. I took a pee break at mile 13. Overall, I felt good.

I saw my family just past mile 13. The route entered the Isle of Dogs, and I was looking forward to getting to 20. Once there, I thought, I could try to shave some time off of the 8:08 mile pace I'd planned.

I'm not quite sure how things went wrong.

I was taking water or sports drink regularly, but just sips. I also ate my miniature dougnuts and brownie that I'd brought as fuel, and later started in on my vanilla PowerBar. 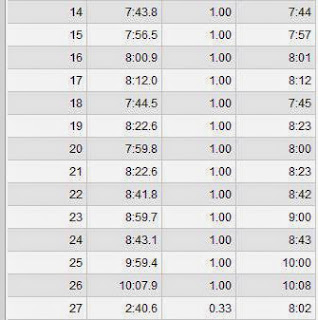 In mile 21 I started to flag. By mile 22 I stopped looking at my Garmin - it was too depressing. I was slowing.

The crowds, meanwhile were terrific. I was starting to withdraw into my own world however.

At 23 or 24 I made a deal with myself. Every time I reached a mile marker, I would be allowed to walk for 30 seconds. I needed to eek out my last reserves of energy. At 24, I tried to just focus on the feet of the runner in front of me. 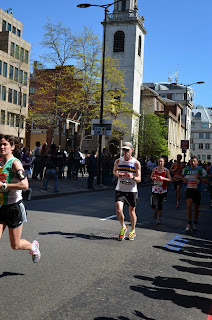 In miles 25 and 26, my breathing was rapid and shallow. My left iliotibial band was starting to hurt, and my stomach felt cramped. I was moving, but most runners were passing me.

Then I made the turn past Buckingham palace, saw the finish, and sprinted towards it. On crossing it, I immediately leaned on a fence to get my breath back. One of the marshals urged me on. My time was 3:34:57.

I gathered my back from the baggage lorry, and sat under a tree. I sipped a coke that I'd brought, but it was too sweet. I tried to put on my running trousers, but when I stretched out my leg my calf locked into a vice-like cramp. I got to my feet, and eventually to the trousers out. Then, I headed out of the park, and met my family near the Thames.

On the positive side, I'd finished, and the crowds had been terrific. I'd been looking for a 3:24, and felt that I had the preparation to run that. So, my dramatic slowing in the last miles was discouraging - but this analysis can wait until another blog entry.


Posted by Middle-aged runner at 11:31 No comments:

The week before the marathon... 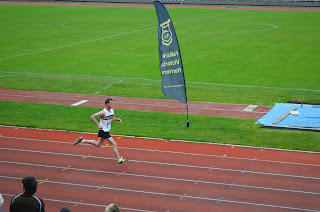 6 days until the London Marathon.

Yesterday I ran the Grangemouth Round the Houses 10k.

I was hoping for a personal best at the distance. I achieved this last year in this race (after 10 years of not
beating my P.B. in other 10K races).

This year, because of my training for London, I had more miles in my legs.

But I was also one year older. Doubtless this doesn't matter too much in your 20s and 30s, but now I'm 48. I don't feel slower,
but the miles are perhaps a touch harder.

I turned the corner and headed into mile two. The route was comprised of a loop through the town of Grangemouth, and ended
on the track in the stadium.

In mile 3 we turned into the wind. I was running hard, and just focusing on the road. I passed a runner who really breathing hard - had he set out at a pace that he couldn't sustain? 3 was 6:57.

In mile 4, D., a friend from the running club caught up. He's much faster than me, but offered to block the wind a bit as he was having an easy run before the marathon (which he is also doing). I was flagging a bit, and just watching his feet helped. I certainly would have slowed without him, and so I just stuck with him and counted down the kilometer signs. 4 was 6:54.

We made the turn back towards the start, and the wind pushed us along. Mile 5 was 6:34.

The final mile turned back into the wind before entering the stadium. D. surged on, and I just kept moving. At the back of the stadium, a runner was walking. He must have really went out hard to get this far in this quick, and then, with just 200 meters left, slow to a walk. Mile 6 was 6:55.

I entered the stadium and sprinted to the finish.

After the finish, I was slightly disappointed. I'd run as hard as I could, with a pacer even, and had missed my personal best by 1 second. However, when I got home I checked the results and found that I had indeed ran a P.B. - 41:30 - beating my previous time by 3 second.

At a stroke, I went from feeling slightly washed up, to still vibrant.

Last week was as follows:

Posted by Middle-aged runner at 11:39 No comments: