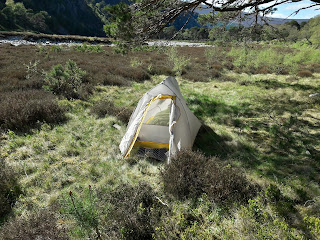 I left the hostel in Newtonmore and headed up the cycle path to Kingussie. The sun was out, and it warmed quickly. I knew that I'd be heading away from civilization for the next two days, so I took the opportunity to pack in some calories: a tin of Coke and a sausage roll. 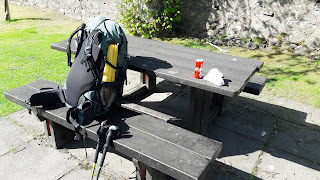 My pack and my mid-morning snack, in Kingussie

I headed up the road, past the Ruthven Barracks ruins, and into the woods. The track through Glen Feshie was a delight. 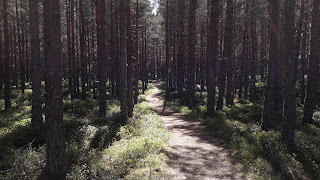 The track through the woods

Eventually, I came to the refurbished bothy at Ruigh Aiteachan. The friendly keeper was there with his daughter, working outside, but they invited me in for a tea. This was most welcome. The keeper showed me around the building, and the interior featured new wood panelling throughout. This has to be one of the nicest bothies in Scotland.

It was mid-afternoon, and so I pressed on for a bit. As the trees began to thin out, I sought a good place to pitch my tent. I was keen to stay among the Scots Pines of the Glen, and camped near the end of them.

I used some river water to soak my sponge, and wiped off. Inside the tent, with the sun, it was almost too warm. I left and walked up the trail a bit, but a river crossing made it impassable. I slabbed along the river for a bit, and found an inviting swimming hole which would be fun to explore with my son some time. Back at my tent I read, looked at my maps and dozed.

In the early evening, I heard someone calling from the path. It was a Challenger from Korea, an older woman, looking for her son (who'd apparently walked ahead). I'd seen his tent pitched up ahead, but warned the woman that the path they were on would lead to a river crossing. Her husband arrived, and I guided them to the alternative trail that avoided this crossing. 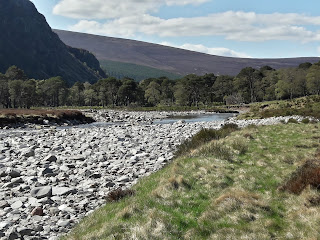 River Feshie, near my tent

I was up and moving early. The trees of Glen Feshie gave way to the open moorland of Glen Geldie. The sun was out, again, and I was making miles.

A few hours in, and I reach the footbridge over the River Eidart (a tributary of the River Feshie). Following the Eidart up into the hill looked inviting, but I had a country to cross, and so this was left for another trip. 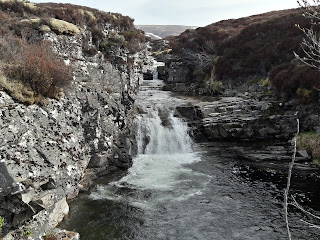 The path through Glen Geldie was suprisingly dry. 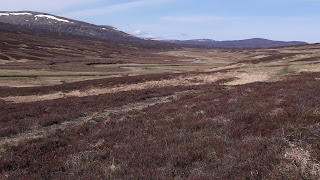 The miles passed, and I stopped for lunch at a small group of trees. On my way I'd passed a conservation group, working on one of the old structures in the Glen.

I continued, and as the miles mounted I started to fatique a bit. Eventually, I reached the trees on the approach to the Linn of Dee. The sun was so bright, it was hard to see my phone to take photos. 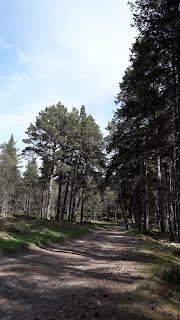 Back in the trees, on the approach to Braemar

A right of way sign confirmed that I was 27 miles from Kingussie. On my reckoning, I'd done 20+ miles from Glen Feshie, and still had a few miles to go to Braemar. 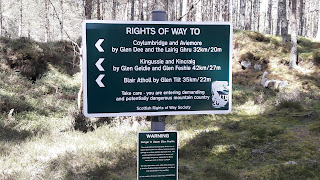 A big day from Glen Feshie

I walked through the grounds of Mar Lodge, and then along the road to Braemar. I was beat. I rested every hour, and needed to filter more water from a stream by the side of the road. I fell in with another Challenger, Andre, leaving Mar Lodge, and we chatted for a bit before he took a more scenic route into the village.

In Braemar, I stopped at the Co-op, and purchased some crisps and a Coke. As I was eating these outside, I was hailed by Thilou, who I'd met
on my TGO Challenge four years earlier. With her and her partner, we pitched at the Braemar campsite. I showered, and then met other Challengers at the pub. There, with a welcome dinner and some Cairngorm beers, we passed a pleasant evening. 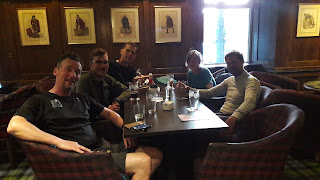 With Thilou, her partner and other Challengers at the pub

It was a good day, but the miles had taken a toll. Walking to and from the pub in the evening, I was slightly hobbled by pain from my lower left leg, near the ankle. I turned in for a comfortable night in the campground.