The Run of the Mill hill race 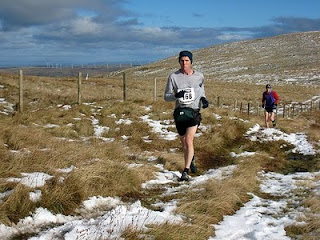 174 days until the Boston Marathon

I started near the back of the pack for the first running of the "Run of the Mill" hill race. (Photo: copyright, Bill Fairmaner)

127 runners followed the trail into the woods. I was wearing a headband, a lightweight, long-sleeve shirt, thin gloves, shorts, ankle-length wool running socks (I knew my feet would be wet by the end), and my Walsh hill running shoes. I carried a bum bag with a waterproof jacket, nylon running trousers, a small bottle of sports drink, compass, map, whistle, and cookies.

I chatted with my Work Friend as we ran through the woods. The trail was narrow, so we couldn't pass anyone, and the pace slowed as runners became bunched up.

After a half mile the trail opened up a bit, and as it descended I sped up. I could see a friend, M., a little ways ahead, and tried to keep him in view as he passed other runners. In an earlier trail 10K race this year, I'd kept with M. nearly the whole distance.

The race route then began to climb sharply up a hill. It was steep enough to preclude walking. I chatted with M. as we climbed.

Eventually, the inclination eased a bit, and running was possible. I started to run where it was feasible, and walked the steepest sections. The wind grew stronger as we gained elevation.

Near the first summit, the wind was strong. I'd taken my gloves and head-band off in the woods earlier, but now slipped them back on. The ground was muddy in places from recent heavy rains.

As we climbed, bits of ice became evident. I was feeling good, but there was still a fair distance left.

After the first summit, there was a level stretch and then a slight climb to another hill top. The route turned, and headed to a third hill top.

The gradient was moderately steep, but I kept running just to stay warm. Now there were patches of recent snow on the ground, and frozen puddles. In other parts of the trail there was still water, so my feet were now wet.

Eventually, I came to the final hill top, and began the long descent. Parts of it were on a dirt road, and my numb feet felt like they were slapping the ground. Because the gradient was so steep, it was difficult to go all out - I didn't want to slip.

Off the road after a mile or so, the route againg headed back into the woods, and then back to the start. My wife and children were in a clearing before the woods, and I gave my son a high-five as I passed.

I'm easing back into my running since the marathon. In this past week, the third since the Loch Ness marathon, I played basketball on Tuesday, ran Weds (5 miles, hill route), Thurs (3.1 miles on the track), Saturday (5ish road/woods miles, with hills), and this 9 mile race on Sunday.

I haven't started training for Boston yet, but I'd like to run 4-5 times a week to keep up a decent running base.

The nights are definitely drawing in now. The large syacamore tree in our yard still has most of its leave, but it won't for long. Next week the clocks shift, and it will really sink in.
Posted by Middle-aged runner at 11:50 No comments: 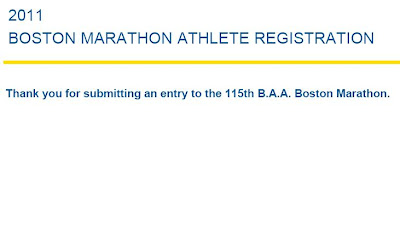 180 days until the Boston Marathon.

Yesterday I registered. I wanted to be sure I got in, and attempted to register as soon as the online site opened. It wasn't working, and I retyped my details on the entry form, submitted them, and had them erased repeatedly. I could see from the twitter feed that others were having the same problem - likely the Boston Athletic Association's servers were pretty busy.

Eventually, after more than an hour, my wife was able to get my form submitted. I see this morning that registration is full, so this effort was worth it. Can the race be full already? Wow.

The two weeks since the Loch Ness Marathon have been pretty light, running-wise. I did 5 or 6 miles in total the week after the race, and then caught a stomach bug that was working its way through my family. I didn't run for 5 days, perhaps the longest break I've taken from running in a year or so (excluding my backpacking trip). I ran this past Friday, Saturday, and Sunday, getting in about 19 miles all told.
Posted by Middle-aged runner at 23:23 No comments: 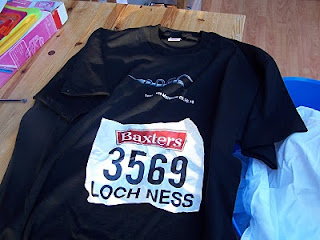 The horn sounded and the race began. Nearly 2,500 runners were behind the starting line, and I was between the signs for the 3:00 and 3:30 estimated finishing time runners.

I shed the garbage bag that I’d been wearing over my shirt as shelter from the drizzle and the cool morning temperature. I’d had my arms tucked inside the bag, trying to keep warm. I crossed the starting line. Music blared through large speakers: and I would walk 500 miles and I would walk 500 more...

The slope eased in mile 2. Runners streamed past me, at what seemed like a 10K race pace. My plan was to take it easy in the first 6 miles, and treat them almost as a warm-up. I’d learned a hard lesson about running out of energy in the Edinburgh marathon. I wanted to fool my body into thinking it wasn’t running yet in the first miles of this race. My time for mile 2 was 7:42.

During mile 8 I felt a rock in my shoe. I stopped and took my shoe off, shook it, and then put it back on. This was my first mile over 8 minutes, at 8:01.

I was tiring slightly, but ran 9 under 8 minutes. I was pleased to get to double-digit miles at the 10 mile marker.

In miles 11 and 12 I started to flag. I hadn’t even done a half-marathon yet, and I was feeling tiredness in my legs. I ate more of my brownie, and took some water.
I fell in with a friendly runner from Ireland named John. We chatted as we ran and the miles slipped by. 13, 14, and 15 were at or just under 8 minutes per mile. The rain had stopped now, and we had occasional expansive views of Loch Ness. I’d finished my food now, and was running without carrying anything. Eventually, I slipped ahead of John.

Miles 18 and 19 held a large climb. Unaccountably, I started to feel good. 18 came in at 8:35, and 19 was 8:11. Although these were slower that my goal pace, they were hill miles, and I was encouraged to be this late in the race and still feeling o.k.

Near mile 20 I fell in with a runner doing the race for “Help the Heroes”. He was running a decent pace, and I slipped in behind him. Mile 21 came in at 7:47.

There was another climb in in mile 22 and by 23 I began to seriously tire. My pace slipped above 8 minutes/mile once more. I knew that it was only a 5K left, but my energy was depleted.

I just kept moving in mile 24. I wanted to stop. As my pace involuntarily slowed, I knew that I was unlikely to qualify for Boston. I was in the first stages of hitting the wall. I wasn't there yet, but I couldn't hold my pace any longer. 24 came in at 8:42.

I fixated on the legs of the guy in front of me, and made that my whole world. I imagined that there was a rope between us and that he was pulling me. I thought of Joe Simpson crawling from back to his camp with a broken leg in Touching the Void. He didn't focus on camp, but on the next rock outcropping, and dragged himself towards it.

I just kept this guy's legs in view. We crossed a bridge over the river, and even the slight incline of the bridge was exhausting. The sun was out as we headed toward the park and the finish line.

26 was 8:48. I knew there was only a lap around the track left, so I began to sprint. I saw a large , inflatable Loch Ness Monster, and thought that this was the finish line. It wasn’t. I put in one more burst and heard the announcer say my name as I crossed the finish line.