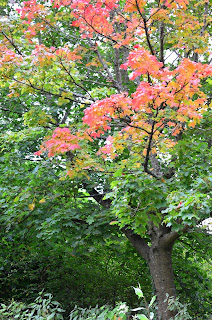 This week my lungs were on the mend.

I had been prescribed prednisolone (a steroid) tablets to help get my lung function up last week, and completed my course of this on Thursday.

As my lung capacity has increased, I have started to return to activity. This was my week:

The reason for throwing in the walks was to get my legs underneath me a bit for an upcoming backpacking trip next month.

I'm assuming it was a side effect of finishing the steroids, but I felt drained on Friday at work. I remember feeling the same way following the completion of my two previous oral steroid courses this summer.

So now the question is whether I will crash again, lung-wise, in a few weeks. My hope is that the inhalation steroids will keep things stable
this time. But now my confidence has been shaken.

We are losing 4 and a half minutes of light a day now, and some of the maples are starting to turn red.

Posted by Middle-aged runner at 09:33 No comments: 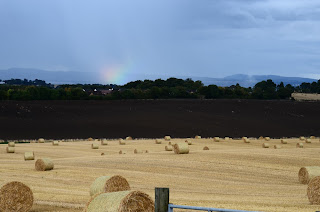 This was my exercise week:

I've actually felt worse. The first time my lungs crapped out this summer I suffered through some broken, breathless nights.

The second time, a few weeks later, I again had a weekend feeling breathless and shattered.

The third time I fell ill, two weeks later, the cough returned, and I was wheezy at night once again. But I had an inhaler, and hitting this in the night allowed me to sleep.

This week my peak flow dropped to 150 on Thursday. My lung capacity was 26% of normal.

I went to work this week. I even brought in my swim clothes on a few days, thinking I might be able to squeeze in a few easy lengths.

But by the afternoon I would be dragging, and any possibility of greater activity was out of the question.

At home, I'd lay on the sofa, breathing. A drowsy lethargy would take over.

On Friday, I returned to the doctor, and was prescribed oral steroids once again.

Today, Sunday, I tried a short run outside the recreation center where my son was competing in a swim meet. Going up the slightest of inclines, I was winded. It was like running on Everest.

On the way back from the meet, the rain lifted, and a partial rainbow came out over the recently cut hay fields.


Posted by Middle-aged runner at 09:47 No comments: 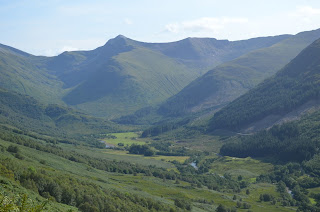 This past week started well, but I deteriorated sharply over the weekend, lung-wise.

The pattern is becoming clear. My breathing deteriorates, I take steroids, improve, start running again, finish the steroids, and start the the decline in lung function once again.

Here was my week:

My peak-flow (lung function measure) was 490 at the beginning of the week. On Sunday evening I was coughing constantly, and my peak-flow was 220. Normal peak flow for my age, gender, and height is 575.

I'd pulled out of the Ben Nevis Race a few weeks ago, when it was clear I wouldn't be able to do the necessary training. Nonetheless, I wanted to support my friend G., who was running the race. On Saturday, I took him to Ft. William, and jogged a bit up the hill to get some photos of him as he descended. It was a perfect fall day, and there was a great view of Glen Nevis from the trail.
Posted by Middle-aged runner at 01:15 No comments: