The second hour of a long run is the hardest 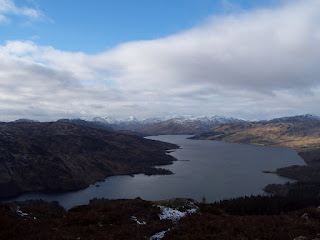 91 days until the Edinburgh marathon

I jogged down my street, and placed my water bottle and a gel in a tree on the corner. I sometimes wonder whether someone will take it, but so far it has been o.k.

From the corner I began my first "town loop", a 5.4 mile circular route that brings me back to this corner. For the past two weeks I have not been doing my long runs, as I had a hill race one weekend - which took everything out of me, and left my whole body sore for two days - and a longish cross country race the next.

These races are fine for helping with speed, but I now need to focus on building endurance.

My wife had taken the children out for the afternoon, so there were no excuses. My plan was for two town loops, and then a third, shorter loop, to get to 14.6 miles all in.

There was a feel of spring in the air, and some flowers were beginning to come up. I had the wind at my back for the first part of the loop, and then ran against it on the second half.

My first loop came in at 43:35. It didn't feel good - my legs had no spring - and it felt like a lot of effort in the second half. I stopped at the tree, had a drink of water, and grabbed my gel. As I began the second loop, I squeezed the gel into my mouth. It was orange flavour, sweet, and sticky. The gels are experiment for this marathon training programme.

Perhaps it was the gel, or maybe I had shaken off my tiredness, but in the second loop I began to feel better. I looked at my watch, and noted that I'd been running for 58 mins. Just a bit more to get to the second hour.

I didn't feel bad on the second half of my second loop, and it came in at 43:37. Again I had a swig of water at my tree. I was now at 1:28 in total, and so I was halfway through this second hour. Another short loop, and it should be full.

My hamstrings felt tight, and I was by no means fresh, but I felt o.k. I did my partial loop, and returned to my house at 2:00:16. I was pleased with a reasonable second hour of running. There is of course much more to be done.

Last weekend - instead of running - I hiked to the top of a nearby mountain with my wife and children. From the top, a loch (Loch Katrine) was visible, and the sun caught some of the snow capped mountains to the north.

Posted by Middle-aged runner at 12:06 No comments: