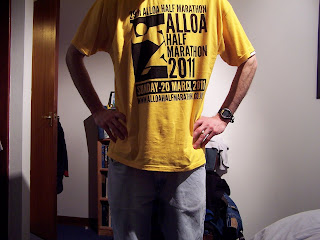 29 days until the Boston marathon.

The gun went and the crowd surged forward.

I was towards the front of the 901 runners in the Alloa Half Marathon. It was overcast, drizzling lightly, and cool. Perfect for running. I wore a short-sleeve synthetic shirt, running shorts, socks and the newish running shoes that I'll wear in Boston. The timing chip was strapped to my left leg, just above my ankle-length sock.

I crossed the start line and started the chronometer on my watch.

I ran with the crowd, and consciously took the first mile easy. 7:06. This was a touch too easy maybe; to break 1:30, my goal, I needed to run 6:52 miles. On the other hand, it was useful to go out easy and have some gas in the tank for the later miles.

In mile 3 I picked out a runner who had passed me, and tried to stay with him. He was wearing black shorts and a black shirt and was older, or maybe my age. His calf muscles were thinner than you usually see in a distance runner. He was running a good pace though.

Mile 3 had a bit of uphill, and came in 7:17. I was certainly off pace, and was beginning to think it might not be my day.

In mile 4 I felt like I was picking up the pace. It too had some uphill, but also some downhill. The guy in black was pulling away. I was disappointed to see it come in at 7:18. Was I really that far off pace? It felt like I was running hard, but the clock was telling a different story.

Mile 5 contained a steady downhill. I strided out a bit, and felt that I was running as fast as I dared this early in the race. It came in at 6:27. All was forgiven - I'd cancelled out one of those previous slow miles.

The course descended into a village at the base of a local range of hills. The guy in black seemed to be slowing a bit, and as the route turned to follow a different road, I caught him.

The route was mostly flat for the next four miles, with only an occasional rise or dip. Mile 6 was 6:50.

I started picking people off. I fixate on the person in front of me, close the gap, and then pass. It was a gradual process. 7 came in at 6:58.

Mile 8 contained a short out-and-back on an adjacent road to make the correct distance. I knew this was coming from last year and sped up a bit. 8 must have had a gradual downhill as it came in at 6:16.

Mile 9 had the steepest climb of the race as the route turned back towards Alloa. I was passed by one or two people on the hill, and the mile came in at 7:07.

In mile 11 I caught a young guy who looked like a footballer. Now I was running hard. We passed the mile marker together, and I remarked that there were just two to go now. He grunted his assent. The mile came in at 6:49.

The route was now level, or slightly downhill. I passed one or two people, and was now occasionally passed by runner who were opening it up here towards the end. The pace was appreciably quick now. 12 came in at 6:43.

The last full mile. I was tiring now, but able to hold my pace. When I'd first done this race two years ago I'd suffered at this point with iliotibial band pain and fatigue. I'd thought then that I was so happy not be thinking about a full marathon.

This year I was in the midst of marathon training. 13 came in at 6:51. I still couldn't see the turn towards the finish line, but shortly after the mile marker I started to kick. I passed a few runners, and made the final turn towards the end. There was a guy in front of me, and I got close, but didn't pass him.

But I'm 45 years old. This was a personal best time for the half-marathon, which, admittedly, I'd only started doing two years ago. I can't be too disappointed.