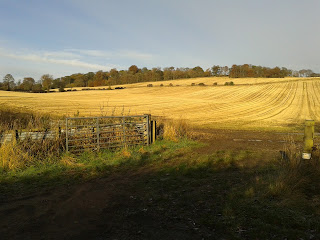 It was tied for my slowest of the year.

My times in the first few months of the year were better than last year, but still over 21 minutes.

So, consistent effort has paid dividends.

Today I ran hard, but my time was over 21 minutes again. However, I'd been ill with a stomach bug mid-week, and may still have been weakened from this. Also, I'd run the Glen Ogle ultramarathon the weekend before, so perhaps my legs weren't fully back (though they felt fine).

It late in the year now, and the sun is low. On my run yesterday, I saw that the fields had now been harvested.
Posted by Middle-aged runner at 08:37