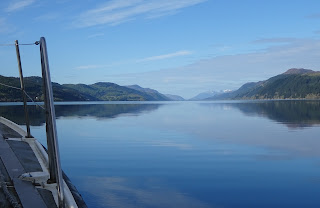 I was up early, and made a cup of coffee in the hostel kitchen. I had a quick shower, given that I likely would not get another chance for a day or two, and then changed into my hiking clothes - running shirt, swimming shorts, waterproof trousers, running sox, and approach shoes.

I left the hostel with Stuart, Lorna and a friend of theirs. We stopped at the Co-op grocery store, and bought fresh sausage rolls. We then walked to the pier on the other side of Drumnadrochit.

We were joined by a few other Challengers, and boarded Gordon MacKensie's boat to cross Loch Ness. It was a calm, clear morning, and the Loch stretched to the horizon. I received a text from Charlie indicating that he'd missed the boat, but was reconsidering the walk because of his knee.

We landed at an old pier on the other side of the loch at Inverfarigaig, and I passed our packs to Stuart, who was off the boat first.

We walked together for a mile or so along a road into the forest. My route headed South at that point, so I said goodbye to the others, and headed out on my own. I was a little sorry for this, as it had been a lot of fun walking with them. 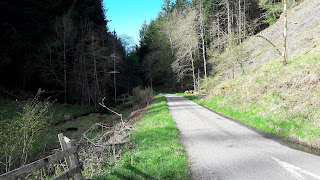 The road led up a hill, and I was warm when in the sun, but chilled when in the shade. Next to the road ran a small burn, and it was a pretty walk through the forest. I stopped after the hill under some inviting trees, and made a cup of coffee. 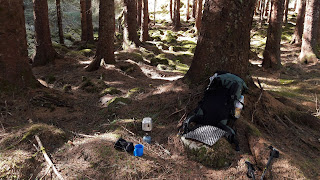 Coffee break under the pine trees

I continued at crossed through the hamlet of Whitebridge, which featured a bridge build by General Wade in 1732. 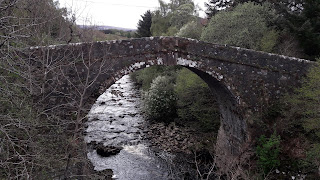 The Old Bridge at Whitebridge

I then headed towards the hills. I took a minor road for several miles towards Garrogie Lodge, stopping for lunch near a shed, and then reached a track the led along Loch Killin towards the Monadhliath Mountains. It was a long afternoon's walk, and I passed the time listening to an American political podcast The Axe Files. 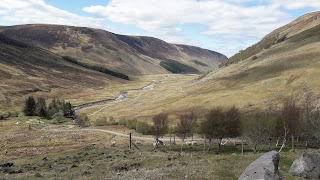 View back through Glen Killin

I took the track up the hill, and shortly after a junction in the road, came to a newly built, small shooter's shelter. It was open and unoccupied, so I went in for a rest and to take a compass bearing. Though I was on a track, there were several other tracks heading off in different directions, many not shown on the map (the Monadhliath being an active site for windmill construction). I took my bearing, and then continued up into the hills. 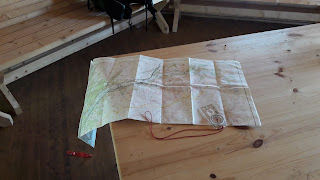 The Monadhliath is a great place to practice navigation skills

I eventually came to the end of one track, at what may have been Chalybeate Spring. It was marked on the map as such, and I confirmed my coordinates with the OS app on my phone, but it was a trickle of water coming from a peat hag. Nonetheless, I found a non-boggy place to pitch my tent, near a burn. 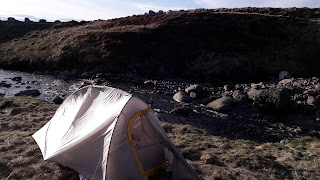 A nice evening in the Monadhliath

It had been a day of sun, and the evening was mild. That said, I was up high and there were the remnants of snow drifts just behind my tent. I took a sponge bath, cooked, and explored a little bit. Above my camp two streams converged, and in one I saw small trout. This would be a long walk in for some fishing, however. 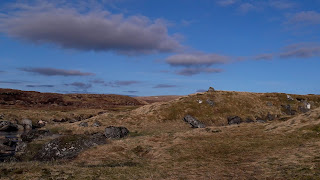 Evening in the hills

The next morning dawned a little overcast. I did my normal morning routine of making coffee before leaving the tent, and then packing up. 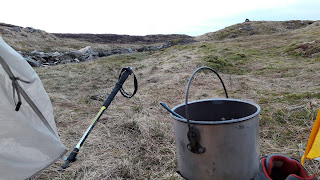 Morning view from my tent 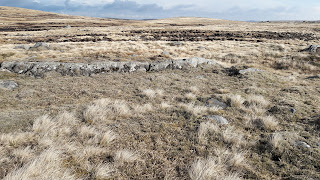 There aren't many distinctive features on the Monadhliath plateau.

My target was Carn Dearg, a Munro, and I made it to the summit before lunch. 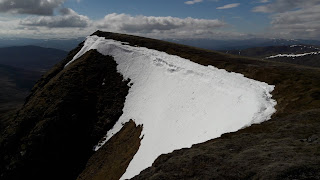 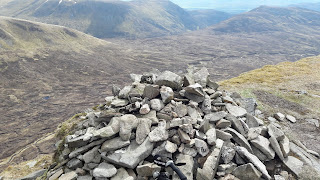 I then descended, crossed a boggy stretch, and headed to Newtonmore. I arrived in the early afternoon, met Sue (one of the T.G.O. organisers) and booked a bunk. Together with another Challenger, I headed to the pub across the street, and this morphed into dinner with a larger group. Another excellent day on the Challenge!