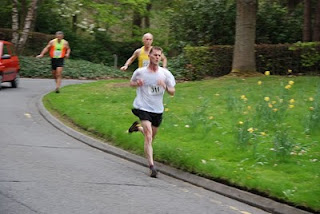 17 days until my qualifying marathon.

The Dumyat Hill Race is a 5-mile, up-and-down race not far from where I work. It's about a 1,300 ft climb, starting on a road, winding through some woods, and then ascending over an open hill top - where sheep graze.

It was a bit warm at the start, and I didn't want to go out too hard. I run the hill often, and knew what was coming. I stayed with the crowd, and didn't worry about the odd runner sprinting past.

My strategy is to not kill myself on the steep climbs. I run where practicable, but on the very steep portions, walking fast is as good as running, in my view. I also think of these walk portions as a break of sorts, although I'm still breathing hard as I ascend.

I hit the first climb and immediately slowed down. Several people passed me. I'm just not that fast running uphill. However, I tried to keep my legs moving quickly with short strides.

One up through the woods we emerged onto the open hill. After a short climb, the trail levelled out a bit, and I tried to pick up the pace.

I was sweating a lot now, and droplets sometimes trickled off of my eyebrows.

The thing in a hill race is to keep moving. There are times when you think you have nothing left, but you have to just keep moving. A woman with a tatoo on her back passed me on the climbs, and I'd pass her on the flatter stretches.

As the trail steepened near the Dumyat summit, the leaders starting emerging on their descent.

A local runner I know passed me handily near the top, but I couldn't do anything about it. I had my eyes on the path below, and was just concentrating on moving.

I reached the summit cairn not far behind the local runner. As we turned to descend, I took a step outside his path, and accelerated.

I love to descend. Without the constraints of my lung capacity, I can go as hard as I wish - and do so.

I started picking off people one by one. I know the trail well, and know exactly my preferred line when descending.

I reached the fence to the wood and stepped over it without breaking stride.

In the woods I ended up behind a strong runner from a Glasgow running club. I decided to stick on his heels and let him carry me through my increasing fatigue. We rushed through the woods, and I passed him on a steep descent to the road.

On the road there's a small climb, and he passed me once more.

The road once again descends, this time to the finish line.

The club runner was ahead of me rounding a curve on the road. However, he stayed on the grass, and I ran on the tarmac - in my experience it's just a touch faster.

In the picture above, you can see me passing him.

The race effort has had a cost. I want to do a 20-miler this weekend to make-up for the lack of a long run last weekend. However, my legs are really sore today, Thursday, the day after the Dumyat race. It was only a 5-mile race, but I ran hard, and an all-out descent takes its toll on the legs.

We'll see if I feel better by the weekend.
Posted by Middle-aged runner at 10:16